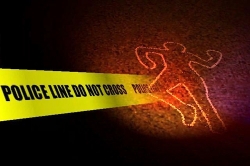 Officers quickly staged at Pine Street and University Avenue. Dispatch reported the man with the gun was on Pine Court, walking toward Pine Street. The officers walked north on Pine St. toward the suspect’s reported location, according to La Mesa Police. Some officers were armed with rifles, some with pistols.

Officers identified themselves and ordered the suspect to drop his weapon. The suspect racked a shotgun as if chambering a round and then pointed the shotgun at the approaching officers.Officers opened fire and the suspect was struck by at least one round. Officers rendered medical aide to the suspect and called for paramedics. The suspect died at the scene. It is unknown at this time how many rounds actually struck the suspect or were fired by officers.

La Mesa Police Detectives are currently on scene in the 4800 block of Pine St. conducting the officer involved shooting investigation. Pine St. between University Ave. and Allison Ave. will be closed at least until mid-morning on Saturday.

Authorities have not yet identified the suspect.  However La Mesa Today interviewed family members at the scene who identified the dead man as Andrew Joseph Yacko, 35, of La Mesa, a journeyman electrician who worked until May 1 at the San Onofre nuclear power station.

"I don't blame the police; they did what they had to do,'' Yacko's brother Michael Yacko Jr. said this morning. "He was a good kid. He just made a mistake.''