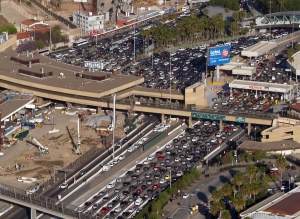 December 29, 2014 (San Ysidro) - A man killed by Customs and Border Protection agents at the San Ysidro crossing  on Christmas Eve was an El Cajon resident.  The County Medical Examiner’s office has identified the man as Francisco Manuel Cesena, 40.

According to Customs and Border Protections, Cesena was detained while trying to cross back into the U.S. from Mexico on a pedestrian crossing. After a records check revealed that he was wanted on a warrant and should be considered armed and dangerous, he was taken to a security area, where a pat-down revealed he was carrying heroin. There he allegedly jumped over a counter and attacked the two agents.

During the scuffle, one of the agents fired a Taser. Cesana collapsed and stopped breathing about 15 minutes later. Agents and paramedics performed CPR and he was transported to a hospital, where he died shortly after admission.

Four agents were also reportedly injured in the scuffle.  They were taken to a hospital and screened for minor injuries.

The death is being investigated by San Diego Police homicide detectives, Customs and Border Patrol, and by the federal department of Homeland Security’s Inspector General office.

An autopsy is pending.