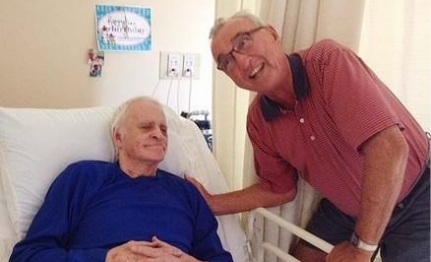 See video of reunion on KNSD

Photo: As a result of the region's first Identify the Missing event, Randy Gatewood, missing for 10 years from his family, has been found by his brother Gene Gatewood, at right.

A native San Diegan diagnosed with dementia reunited with his family last week, thanks to new information uncovered following the region’s first Identify the Missing Day event in March.

Family members of Thomas “Randy” Gatewood, missing for 10 years, are elated after investigators helped them locate the 79-year-old, who is now living in a skilled nursing facility in Lemon Grove. Randy’s brother, Gene Gatewood, 77, of Fountain Valley, Calif., said his brother seemingly disappeared from his home in Yuma, AZ, in 2007 and family members had been unable to find him. 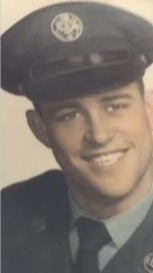 “I honestly thought he was deceased,” said Gatewood. “It’s just miraculous that we were able to find him. We’re just thrilled.”

The Gatewood family learned of Identify the Missing Day when Gene’s daughter Kari, 53, of San Diego saw news coverage of the upcoming event. She called her father to alert him of the opportunity to try again to find her uncle.

Over the years, Gene filed missing persons reports in both Yuma and San Diego, but neither bore results. He said he and his brother were not estranged, and he couldn’t think of any reason for his brother to choose not to stay in touch.

At the Identify the Missing event, Gene and Kari happened to be paired up with a National City Police Detective Leiderson Zeferino, who updated the earlier San Diego missing persons report with additional information and new DNA samples.

The detective uncovered a record showing that Randy had been admitted to Paradise Valley Hospital in National City in 2011.

From there, Gene said he spent a month trying to obtain his brother’s medical records to find out to which acute care center he had been discharged. Finally, on April 20, he got his answer and the next morning, he and his daughter went to see his brother.

He and his daughter almost didn’t recognize Randy when staff brought him in his wheelchair to meet them, until his brother smiled.

Gene said his brother looks better now than he did the last time they saw each other, thanks to the excellent care he is receiving for his medical conditions. 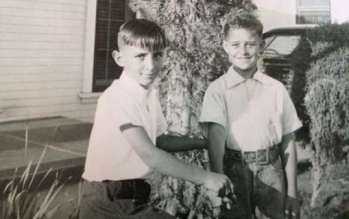 He asked his brother, “‘Do you know who I am?’ and Randy said, ’You’re my little brother Gene Gatewood.’ He’s lucid enough to know those things and he remembered my daughter.”

The two told Randy that they’d been searching for him all these years.

Unanswered questions about where he was for many years before 2011 remain. Gene and his daughter will work on finding answers over time.  For now, they are just happy to have him back in their lives.

“I am so thankful that the (County) held the event and that we got assigned to Detective Zeferino,” said Gatewood. “If it hadn’t been for that event, none of this would have happened. He still has major health issues but his quality of life will be better now to have family visiting. We’ve already asked permission to take him on outings,” said Gatewood.

Kari Gatewood added, “The most we were possibly hoping for was that we would be able to bring his body home and be reunited in that way and here we wound up getting to find him and bring joy to his final years. It still is unbelievable and amazing.”

Authorities can now close this missing persons case, one of more than 3,100 dating back to the 1950s that are active in San Diego County. That number is part of almost 20,000 missing persons cases in California. There are also about 3,100 unidentified John and Jane Doe cases in California. These facts inspired the San Diego County Medical Examiner’s Office to organize the first Identify the Missing Day, attended by every law enforcement agency in the region March 19. The goal of the event was to help reunite families with their loved ones by updating missing persons cases and submitting DNA for testing.