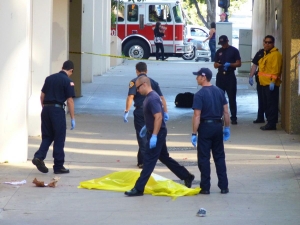 October 11, 2011 (San Diego)—The sound of a man plummeting to his death will likely haunt the hundreds who heard it yesterday afternoon at the Civic Center Plaza. I was interviewing protesters at the Occupy San Diego encampment when I heard what sounded like a small explosion, followed by a thunderous crash. Looking up, I saw a parking garage wall spattered with blood and brains.

“Someone jumped,” a voice nearby shouted as gasps of horror rippled through the crowd. But was it really a suicide? Troubling details and eyewitness accounts suggest the man who plunged to his death may have been the victim of a tragic accident, or possibly even foul play.

A loudspeaker voice urged someone to call 911. I fumbled with my new smart phone, but couldn’t read the screen in the sunlight to dial; fortunately others did.  Police on scene for security at the rally reached the victim within moments and San Diego Firefighters arrived swiftly as well. The victim was prounounced dead due to the obvious trauma.

The victim was a white middle-aged man with a slight paunch, wearing shorts and a white short-sleeved casual shirt. A cast-off shoe lay nearby. He reminded me of a favorite uncle, possibly a tourist. He certainly wasn’t dressed for business downtown, nor did he look like a vagrant.  Lying in a crumpled heap, legs bent at unnatural angles, he looked both small and vulnerable as officers covered him with a yellow tarp.

How, I wondered, had his life come to end this way? That thought, and the horrific images, have played over and over in my mind.

He has not yet been identified, according to the Medical Examiner. I questioned numerous protesters and media representatives for Occupy San Diego, but none recognized the victim.

According to the San Diego Union-Tribune, flyers reading “Important message to intelligent earthlings from your creators” were found near his body. However police indicated yesterday that they did not believe he was connected to the Occupy San Diego rally. There were also conflicting reports that someone had been hanging a banner a short time earlier, and that perhaps the man had fallen while trying to secure it to a railing.

San Diego Police officers at the scene declined to comment on the cause of death. I spoke with dozens of protesters and others who were present. Not one that I interviewed had seen the man actually jump. Nor, oddly, did any of those I spoke with recall seeing a man standing or sitting on the railing, something many suicidal people will do as they contemplate whether to jump or not. Possibly police have other witnesses, but if so they have not released the information.

One woman did, however, swear that she heard a gunshot and then looked up to see the man fall to his death. “I used to own a gun store,” she told ECM, “and this was no suicide.” The witness, a protester who asked that her name not be published, also spoke to a police officer at the scene. She told ECM that she saw a man leaning over a railing around the fifth story just as the victim fell to his death; she claimed the man in the parking structure was a white man with long hair, wearing a plaid shirt. Other media reported that the victim was believed to have jumped or fallen from the seventh, not fifth, story.

A police helicopter searched the surrounding area for an extended period following the tragedy; officers also searched the parking garage while others combed the scene for evidence and interviewed potential witnesses.

According to the San Diego Union-Tribune and other media, police initially indicated the death was a suicide late yesterday.

But early this morning, the San Diego Medical Examiner’s office posted a report stating the man fell to his death accidentally while attempting to post a banner. Yet when ECM called San Diego Police to ask for an explanation of the discrepancy, SDPD spokesman Gary Hassen said the department was looking into it. A call to the Medical Examiner’s office elicited news that the report was based on a preliminary police report and would be updated. Soon after, it was. The reference to the banner was removed and the Medical Examiner’s site now states merely that the man was found dead after apparently falling. An autopsy is pending.

Other media reported that police confirmed there was no suicide note. With the man’s identity still unknown and next of kin not contacted, his mental state is presumably unknown. So what led police to conclude that the man killed himself? A finding of suicide can have serious consequences for the victim’s survivors, since insurance companies won’t pay off on a policy if a person is found to have taken his or her own life.

ECM has asked Hassen what led police to conclude the death was a suicide so quickly, before an autopsy has  been performed. In an e-mail sent today, we also asked for confirmation on reports that there was no suicide note.  We inquired whether there is any evidence that would point to a suicide rather than an accident or even being pushed or assaulted prior to the decedent falling from the parking garage. in addition, we asked what story in the parking garage police believe the man jumped or fell from, and what led to that conclusion.

As for whether a gunshot wound has been ruled out, Hassen advised ECM to contact the medical examiner’s office. We did but have not received a reply.  An autopsy was to have been done today, but results are not yet posted. We have also asked the medical examiner whether a fall from five to seven stories would cause blood to spatter upwards of 20 feet or more, as was evident on the building.

A second death downtown occurred today in the Columbia Center vicinity, just blocks away. A man was found in a dumpster, having apparently slid head-first down a trash chute. According to early news reports, police indicated the death could have been a suicide or accident. In comment sections on media sites, some have questioned why foul play was not also listed as a possibility and speculation also arose as to why the Civic Center death was so hastily deemed a suicide.

The Civic Center tragedy cast a pall over a previously upbeat mood among hundreds gathered at the Occupy San Diego rally, where the number of those camping out grew from 78 to 97 by last night, with many more turning out for marches and speeches. A march on Friday drew some 1,500 to 3,000 people, depending whose estimates one believes. 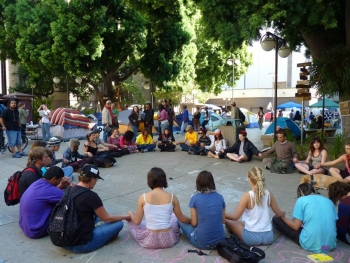 Yesterday, however, a 4 p.m. march was cancelled due to the tragedy only about a half hour before the scheduled march. Instead, some demonstrators formed an impromptu prayer circle. All seemed deeply moved by the death.  Later in the evening, a candlelight vigil was held in the man's memory.

If the unknown man truly did leap to his death, perhaps distraught from loss of a job or home in the current economy, then his death carries a deeper meaning. Occupy San Diego, an offshoot of the Occupy Wall Street national movement, has been encamped in the plaza where the anonymous man died in order to protest bailouts of big banks and undue corporate influence on Congress when millions of Americans are suffering economic hardships.

Was the anonymous man who plummeted to his death yesterday a victim of those very forces that Occupy San Diego is protesting? Or was his demise an unrelated tragedy?

This man has been identified, and I knew him. His long-time girlfriend is a dear friend of mine. I want to thank you for providing the most thorough report available on this tragedy. Please please please keep us updated on his cause of death. This story will be forgotten by tomorrow by most news outlets.

It is best not to speculate as to whether man fell, jumped, or was forced over railing. As was said, authorities preliminary indication was that it was accident or suicide. But, as
Raftery indicated, the wide diversity of eye-witness and police and coroner's statements add to the mystery. It was not even clear from which level he plunged.
Except for the unnecessary speculation at the end of the story, the first-person reporting was excellent, especially in detailing the many diverse statements as to what actually happened.
That is far superior to other news organizations who simply conclude that it was simply an "apparent suicide" and move to next story. It's clear there is a great more to learn about this man and the events that led to his deaath and I'm confident East County Magazine will be the best place to find the complete story.

There is a difference between "speculation" which implies one conclusion or another, versus merely raising questions. Our story does not suggest that any specific scenario was what occurred, merely lists a few possibilities not considered in most other accounts.

Probably this piece should have been filed as an editorial rather than news, but what struck me was the editor's making the connection between rising suicides and corporate greed in America. In light of the latest news regarding the dead man, this was probably not the case here, but certainly Editor Raftery had the right to point out the possibility, especially in the context (literally) of the demonstration. I can only imagine how horrific it must have been to see it happen.

Mavis: You are confusing writing with journalism; this piece is writing. We have way too much first-person, how-I-felt stuff here i.e. "blood and brains, favorite uncle, small and vulnerable, horrific images..." I did enjoy the former gunshop owner quote regarding guns and suicide; as if those two things never happen together! At least it wasn't "reported" that sdg&e may have been involved! Methinks the editor needs an editor.

before, and it is an emotional experience. Perhaps I should have run this as an editor's column, rather than filing in news but with first-hand interviews I also had important information to report.  I did want to convey the emotional impact that a death in such a public place has on those present. Frankly I was surprised at how it affected me. I've seen plenty of gory photos from fatality accident scenes through the years, and reporting on many major breaking news stories such as behind the scenes at major wildfires, all strictly professional.  But hearing or seeing someone die, and the impact it had, became part of the story in my view--much as we saw reporters moved to emotion covering Hurricane Katrina, reporting live on CNN how they felt.  To take the human feeling out of the equation diminishes the impact of the man's death, I think.

I hope such instances of being actually on the scene to witness a death will be rare, for those who object to having human emotions as part of this one story.