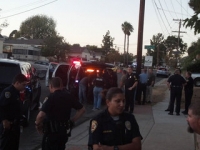 The suspects have not been located and are described as:

Suspect #1: Hispanic male in his mid 20s about 5 foot 9 inches tall with dark hair and a normal build, was last seen running westbound from the scene.

Suspect #2: White male in his mid 20s wearing a white ball cap, a t-shirt and baggy gray shorts, was last seen running eastbound from the scene.