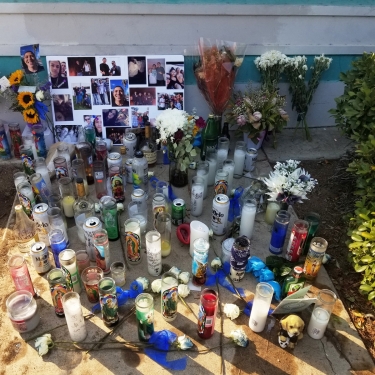 East County News Service
Photo by Della Elliott:Community members have set up a memorial tribute to the victim, whose identity has not yet been released
August 19, 2020 (El Cajon) – El Cajon Police officers dispatched after a 911 caller reported gunshots near 1549 East Main Street found a man suffering from several gunshot wounds around 1:30 a.m yesterday. The victim was transported by ambulance to a hospital, but died before arrival, says Lt. K. MacArthur.
The identity of the victim, who is from San Diego, will be released by the County Medical Examiner after family is notified.
A homicide investigation is ongoing. Anyone with information about this incident should contact the El Cajon Police Department at (619)579-3311 or Crime Stoppers at (888) 580-8477 or www.sdcrimestoppers.org.

It's time to monitor the sale of guns and ammo. What would you do if a friend or a member of your family was injured or killed?