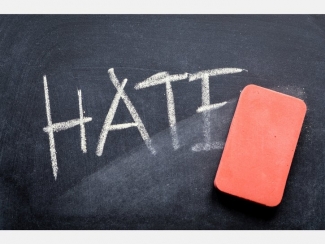 May 9, 2020 (Santee) - For the second time in a week, a shopper was spotted wearing a mask associated with racist hate groups at a Santee grocery store.

A man was seen wearing a swastika mask at 6:30 p.m. Thursday at the Food 4 Less store on Cuyamaca Street.

Deputies from the Santee Sheriff's Station responded to a reported disturbance at the store. They asked the man to remove the mask and he complied, sheriff's officials said.

The San Diego County Sheriff's Department announced Friday it would "continue to look into the matter."

The man's name was not released.

"The Sheriff's Department does not condone hate or acts of intolerance," the department said in a prepared statement. "We are a county that is welcoming of people from all backgrounds."

"Sad, vile acts like this must not be tolerated here or anywhere else," she tweeted Friday afternoon. "It's deeply offensive to the community and our entire region. I want to commend those who alerted law enforcement and our sheriff's deputies for their fast response."

The incident took place days after a man was spotted wearing a Ku Klux Klan hood while shopping at the Vons store on Mission Gorge Road.

Shoppers at the store snapped photos of the man last Saturday and posted them online. The incident sparked outrage from local officials, residents and others on social media.

In a statement issued Sunday evening, Santee Mayor John Minto said the hooded man's actions do not represent the values of the city.

"Many thanks to all who stepped forward to curtail this sad reminder of intolerance," Minto said. "Santee, its leaders, and I will not tolerate such behavior. Santee and its citizens are great, and this particular individual's actions are not representative of us as a people and a wonderful city."

It is not everyone, or even a large minority of the people of Santee who are represented by this awful behavior. But this tiny minority of racists are obviously tolerated by enough elements of the community, even by those who do not believe in this kind of hateful intolerance. I wonder how long the people of Santee will continue to tolerate this blight on their national reputation? At some point it really does require the courage to tell a neighbor that they are an unwelcome idiot who is hurting the community, its businesses, and economy of the city. And that they should move! It is heartening to see the public unafraid to call them out in the stores and in public, but this only really ends when people start kicking that roommate out, or protesting in front of residences that fly the stars and bars. Somehow these guys feel coddled in Santee, at least back in the neighborhoods.