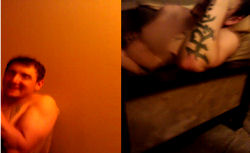 Attacker believed to have met his victim at McGregor’s Bar & Grill
June 12, 2012 (San Diego) -- Detectives from the San Diego Police Department’s Eastern Division have released photos of a man wanted as a “person of interest” in the attempted homicide of a Grantville woman last month. On May 13, officers responded to a call that a female victim, 34, had been found unconscious in her apartment. Severely beaten, the woman remained unconscious for almost three weeks and sustained brain damage from the attack.
During the investigation, detectives discovered the victim met a man at McGregor’s Bar & Grill, located at 10400 San Diego Mission Road, shortly before the beating. The man in the photos below may be the male she met at McGregor’s and is a person of interest.
Detectives are asking the public’s help to identify him. He is a white or Hispanic male, 21 to 25 years old, 5’10 to 6’00, with a thin build. He has tattoos on both arms and a tattoo of a sparrow on the left side of his chest. The suspect may currently be in the military or recently discharged.
Anyone with information about this case or the identity of the male is encouraged to call Eastern Division Detective Laura Zizzo at (858) 495-7942 or San Diego County Crime Stoppers at (888) 580-8477.