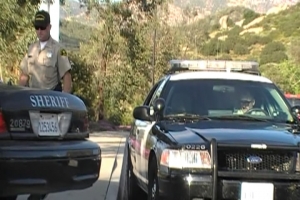 April 20, 2011 (El Cajon ) – A man reportedly wearing a blond wig held up the Wells Fargo Bank inside a Vons supermarket at 13439 Camino Canada in El Cajon at 5:01 p.m. San Diego Sheriff’s deputies set up a perimeter and found evidence from the robbery. A intensive search in the vicinity of I-8 and Los Coches Road ensued, including a helicopter and K-9 search dog team.

East County Magazine videographer Billy Ortiz was at the scene and provided this dramatic video footage of the search. Authorities were unable to locate the suspect in an area with heavy brush, and he remains at large. 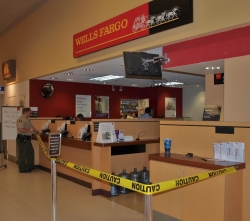 According to Sergeant Joe Passalcqua, the suspect placed a bag on the counter and demanded that a teller open the bottom drawer to give him money. While she was complying with his demand, he palced his hand into his pocket as if he had a gun. He then stepped to the next teller and made the same demand.

After receiving un undisclosed amount of cash, the suspect fled on foot. No weapon was seen.  He is described as a white male adult in his mid-30s, six feet tall, weighing 200-250 pounds and wearing a blond wig. Surveillance photos have not yet been provided by the FBI. 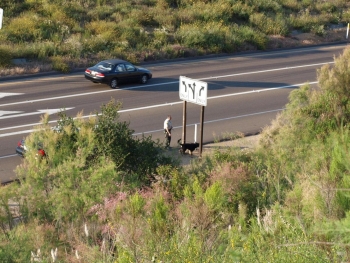