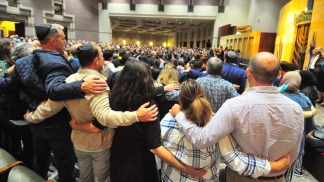 Photo:  Members of different faiths and communities united in solidarity against hate. Photo by Chris Stone

November 1, 2018 (San Diego) - San Diego is 2,450 miles from Pittsburgh, but the psychological distance Monday was zero as representatives of many faiths filled Congregation Beth Israel’s sanctuary and social hall to overflowing.

A vigil service expressed solidarity with the congregants of the Tree of Life Synagogue in Pittsburgh, where a white supremacist gunman killed 11 Sabbath worshipers and wounded four law enforcement officers who rushed to their aid.

Normally, Beth Israel’s combined sanctuary and social hall can hold between 1,200 and 1,300 worshipers, according to the Reform congregation’s former president Jerry Goldberg.

But Monday night’s turnout was “way over that.” 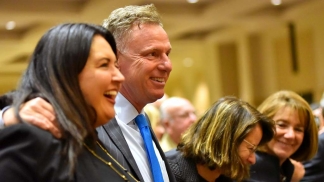 People stood around the periphery of the two rooms, and aisles had to be cleared in observance of fire safety laws.

Mourners were directed to the patio outside, where loudspeakers carried the audio from the service. Lesley Mills, the temple’s executive director, estimated 400 outside — not counting dozens at the foot of the stairs, where a Chabad choir serenaded them.

Other latecomers were apologetically turned away, with the explanation that there was just no more room. Who knows — perhaps there was at least one person there for every one of the 2,450 miles between the two cities.

The program was rich and varied, showcasing diversity both in the Jewish and general communities.

Besides Jewish speakers were representatives of the Muslim and Sikh communities, who received thunderous applause, as did San Diego Police Chief David Nisleit, who represented law enforcement who run toward gunfire, not away from it, in an effort to protect their fellow American citizens.

Representatives of the various Jewish faith branches took turns at the lectern in a 90-minute community vigil service, put on by the Anti-Defamation League, titled “Standing Together Against Hate.”

From Chabad of San Diego, an Orthodox congregation, came Lee Abed, a student at San Diego State University, who read an acrostic essay spelling out the word “Soul.”

There were also representatives of Jewish agencies such as Michael Jeser, CEO of the Jewish Federation of San Diego; Michael Hopkins, CEO of Jewish Family Service; and Tammy Gillies, regional director of the Anti-Defamation League, who emceed the program and was credited as the organizer of the event.

Perhaps some of the crowd’s warmest applause was bestowed on speakers from outside the Jewish community who came to voice solidarity and say the attack in Pittsburgh was not just an attack on Jews, but an attack on America and its values.

As diverse as the bima players were, so too was the audience. In the row where my wife, Nancy, and I sat, by chance our immediate neighbors were a Muslim man, a Christian woman and a Jewish woman from Congregation Beth El who originally hailed from Mexico.

Later in the service, religious leaders of every persuasion filled the bima and its wide wings.  While no Christian representative had a speaking part, representatives of numerous Christian denominations were present, with Msgr. Dennis Mikulanis, vicar of interreligious relations for the Roman Catholic Church, singled out by name.

Yusef Miller, seated next to me, came as a community outreach liaison of the Council on American Islamic Relations (CAIR), a group not without its detractors in the pro-Israel community.

He said this was an evening to put politics aside because “this issue is important to all humanity; if they are after one of us, they are after all of us, and if we can unify under these conditions, we will be as successful getting justice as they are at separating us.”

Nancy Becker of the Lamplighter Revival Center, a nondenominational Christian church in El Cajon, also was seated in our row.

She said: “There is a tidal wave of people in America who love Israel, and we are rising up to let our brothers and sisters know that we stand with them, we are with them, we pray over them because it is God’s will, plan and purpose that we love each other.”

Next to her was Adriana Herstein, a Mexican-born San Diegan for the last 38 years, who said her hope was that our country can “stop the hate.”

“It doesn’t matter where you come from, or what you practice,” Herstein said. “We are all human beings and we share the same world. Enough is enough!”

A succession of poignant moments in the formal presentations included:

Following are brief excerpts from each of the speakers, in order of their appearance.

Rabbi Michael Berk: “It is moments like this that we feel that we are Am Echad, one people. The attack in Pittsburgh was an attack on all of us. The Pittsburgh Jewish community begins sitting shiva tomorrow (Tuesday) with the first funerals and we will be with them in spirit.

“These days, members of the press are objects of scorn by some. Today I say the press and media are our guardians. They work honorably and tirelessly to give us the information that we need to help us understand what is going on. I want to thank all the journalists for the service that you provide our nation.  You are a friend of the people.”

“The energy from that candle will be here long after the duration of that candle. If it is true for the light of a normal candle, how more so is it true for God’s light.”

Mayor Kevin Faulconer: “Tonight we join together not only as San Diegans but as Americans, Americans of all religious beliefs, races and cultures to stand with our brothers and sisters in Pittsburgh.

ADL Regional Director Tammy Gillies (wearing a T-shirt saying “No Place for Hate”): “This T-shirt, this is who I am; this is what ADL does”.

(Her reaction to the massacre): ”I’m shocked, I’m appalled, I’m sick, I’m heartbroken, but I am not surprised, and if you sat at my desk at ADL for a week, you would not be surprised either because this is what happens when hate is left unchecked, when we dehumanize people; when we call people ‘termites’ and use the word ‘infestation’ about immigrants.

“So, as we say at ADL, ‘Words matter’ and if you have a bully pulpit, use it for good.”

Imam Taha Hassane: After reading in Arabic from the Koran, he explained that the passage speaks of the two sons of Adam (Cain and Abel) adding that Allah said that “’because of this, we have commanded the children of Israel that killing one soul is as killing the entire humanity and saving one soul is as saving the entire humanity,’ which means that Almighty God wanted this teaching to be universal, to be embraced and implemented by all the people of the world, all the nations who came after the nation of the Children of Israel, including the nation of the Prophet Muhammed, Peace be Upon Him.

“The most evil thing in this world is taking a life.”

He added that killing people in houses of worship is “evil, the worst crime ever committed against humanity.”

Jewish Family Service CEO Michael Hopkins: “If you are not Jewish, I want to thank you tonight for being here. We stand tonight for all people feeling vulnerable in our communities.  We stand up and we say ‘Enough! Enough!’… I knew two of the individuals who were senselessly murdered: Cecil and David Rosenthal.

“They were brothers. David and Cecil participated in a group that I led [at the Squirrel Hill JCC in Pittsburgh] for special needs adults.  I wasn’t surprised to learn that they were in temple. They loved shul – they would have called it a shul.  They loved their connection to their fellow congregants.  They loved being Jewish.

“It made them feel that they were bigger than themselves. They were part of a community that loved them … Many of you are aware that the alleged perpetrator selected the [Tree of Life] Synagogue because it had participated in the HIAS Refugee Shabbat.  Most of you know that at JFS, HIAS [formerly, Hebrew Immigrant Aid Society] is our national partner in our refugee and immigration work.

“It is important work that we have been doing as an agency our entire 100 years …  not to be political, but because it was the right thing…. We are told 36 times in the Torah to welcome the stranger…  Fear and intimidation will not stop us from living our values and practicing our faith.”

Chabad Student Representative Lee Abed: “In times of tragedy and massacre, a Jew reaches higher, instinctively stretching a desperate hand toward God Himself, pleading for the comfort of His grasp…. In the midst of prayer, Jewish bodies were brutally killed in the Tree of Life community, but not a soul was killed, for souls cannot die.”

Jewish Federation CEO Michael Jeser: “There is something wrong in this world for 11 souls to be targeted for no other reason then that they were Jewish. If we can’t be Jewish in a synagogue, where can we be Jewish?  …  I believe that out of the ashes of this senseless violence, we can rise with a renewed sense of purpose and direction, belonging to a community… Today we stand together as a Tree of Life.”

Sikh Foundation Representative Gagandeep Kaur: She said that a principle Sikh belief is that “everyone is equal and perfect despite the differences in race, creed, gender or color.”

Nevertheless, her people often are targets because “it is mandatory in our faith for men to have turbans and beards.”

After the shooting at the Sikh Temple, “one of the first communities who came to us was the Jewish community, for which we were very grateful… One day the love of many will be out-vocal against the hate of a few.”

Rabbi Devorah Marcus: (After inviting all the clergy in the sanctuary to come up with her on the bima), she said, “Just six weeks ago, give or take a day, we observed the Jewish Holy Day of Yom Kippur in which we asked God to help us atone for the words that we have spoken that we didn’t mean …and the words we said that never should have come out of our mouths.

“According to our Jewish tradition, God weighs, measures and counts each and every word that passes through our lips. They have value, they have significance, and they create and build reality. It is unacceptable in our world for our leaders to peddle hate.

“It is not acceptable for our leaders to be the voice of insults, racism, bigotry and intolerance. … When we live in a world when it is OK to degrade and denigrate another person, we are living in a world of diminished love, a world of diminished kindness, a world where we have grown accustomed and build our capacity for standing idly by in the face of discrimination, intolerance and hatred. And that is not acceptable!”