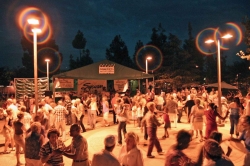 A sample of this year’s band list includes the popular Candye Kane, with her hot swing and blues music, the Taildraggers, a favorite North County bluegrass band, “Sonos” an on-tour, emerging indie a capella group, and East County’s own swinging Downbeat Big Band. Queen of the Boogie-Woogie, Sue Palmer, returns for her 16th season with her “Motel Swing Band”. Aunt Kizzy’s Boys bring out the blues and join many other top notch musicians for the diverse 22-week concert series.

Presented by the El Cajon Community Development Corporation and the downtown business district, the event is sponsored by Sycuan Casino and Taylor Guitars. The family-oriented Concerts on the Green features top entertainers in a comfortable, park setting from 6:00 to 8:00 pm every Friday through September 30th. Blues, oldies, swing, a capella, jazz, Latin, blue grass and country western groups – this year’s line-up has something for everyone. Bring your beach chairs and dancing shoes, take in a meal at one of downtown’s casual dining spots or picnic on the green and relax until sunset meets the stars.

Free music and free parking draw hundreds of spectators to the Concerts on the Green each week. Come on over to San Diego’s East County - where Main Street meets the Promenade - and join the fun. For more information, call the El Cajon CDC at (619) 401-8858, or visit online at www.downtownelcajon.com. See you Friday nights in Downtown El Cajon!

Concerts on the Green – Schedule