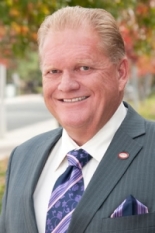 March 1, 2013 (San Diego’s East County) – It wasn’t a Valentine that the San Diego East County Chamber of Commerce Board of Directors voted on February 14 to deliver to CEO Scott Alevy.  Facing a budget crunch, the inland region’s largest Chamber voted to eliminate its full-time paid CEO position, relieving Alevy of his duties.

“Both Scott Alevy and the Chamber are on soild ground,” acting President and Chief Executive Officer Becky Burgstiner told Chamber members at a First Friday breakfast this morning in the La Mesa Community Center.

She announced that Board Chairman Marcel Becker will be taking the leadership helm as soon as he is fully recovered from surgery  in a couple of weeks.  Becker is also Chair of JCI Metals in Lemon Grove.

The U-T San Diego reported last week that IRS 990 forms reveal that assets for the Chamber, a registered nonprofit,  have dwindled to less than $80,000 in 2011, down from over $191,000 in 2008.  2012 records were not yet available.  Alevy’s salary was not disclosed, but former Chamber President Mike Cully earned nearly $60,000 in 2010, his last year. By then, expenses were outpacing revenue amid the economic downturn.

By eliminating the president and CEO paid position, Burgstiner said, “it frees up crucial financial revenues to better serve our membership.”

Chamber Vice President Jarryd Davis also resigned earlier this month. It is uncertain whether he will be replaced.  Sherral Bearss, who handled membership, also recently left to join the Pennysaver, the East County Herald reported.  Abigail Migala has returned on a part-time basis to handle membership.

The shakeup left some speculating on the Chamber's future."Do we now have a headless horseman as a Chamber?" Rick Alexander quipped on ECM's Facebook page.

Reflecting on the changes, Burgstiner said serving as acting President and CEO was “never on my radar” but that she aims to “keep things in perspective,” and appreciates being surrounded by “talented people” to help chart the Chamber’s future.

Also at this morning’s meeting, SDG&E spokesman Don Parent spoke about new pricing options soon to be offered to business customers ; he advised business customers to check now to learn their time of use rates and learn whether your business’ pattern would save money under the new plan.

Next up, Dave Steele with Pure Solar Power drew chuckles by announcing, “If your electric bill is too high, call the East County solar guy.”  He  explained that the “green” in solar isn’t just environmental, but cash savings through rebates, a 30% tax credit, increased property value, and savings on those SDG&E energy bills.  He said he could “make a case” that solar is a better investment than other ways to invest money. 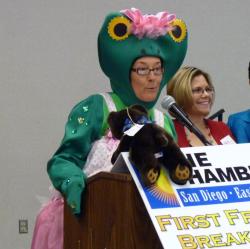 Representatives from St. Madeline Sophie’s Center, one dressed as a frog, talked up the upcoming “frog races”  to be held April 13 at the Morning Glory Brunch benefitting the center helping developmentally disabled adults.

Representatives from the Chamber’s Leadership East County also gave a presentation, including examples of past special projects benefiting the community that have grown out of the program. These include Spreading Art, a graffiti abatement program that has proven successful locally at discouraging taggers by creating murals.  Other projects in process include setting up aquaponics programs at local schools, partnering on a music program with Taylor Guitar and Deering Banjo, and creating a comforting room for children to have visitations with parents at Las Colinas women’s prison in Santee.