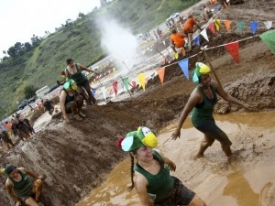 All details, including a video clip, online registration and a map can be found at www.sandiegomudrun.com.

Located in the hills of Rancho San Diego at the end of Highway 94, the San Diego Mud Run is a challenging course for 2000 runners of all ages and experience levels.  Participants run through water spray, down steep grades, through dozens of mud pits, over slippery hills and obstacles, and crawl through tunnels.

Categories include individual and four person teams for each race.  A 1K Youth Mini-Mud allows even the youngest participant to have fun getting dirty for a cause.

The course covers the terrain of the campus and surrounding hills of Skyline Church. “We are excited to host this spectacle twice a year”, says Sports Ministry Pastor Sean Howarter. “It’s memorable, family fun for everyone.”

When asked what she thought of the event, competitor Lauren Snider stated, "It’s like nothing you have ever seen before! The mud is over the top ridiculous and it doesn't even feel like you are running a 5K. Everyone has to run it at least once!"

Duct tape stations seem to be the most popular pre-race event, where participants can tape their shoes so that they will not come off in the thick mud. After the race, food vendors provide much needed nourishment to the runners and their families, while children participate in the Mini-Mud fun run and pre-race Kidz Zone.

A portion of the proceeds from the race benefit the USO San Diego whose mission is to enhance the quality of life of the U.S. Armed Forces personnel and their families worldwide and to create a corporative relationship between U.S. military communities and involved or supporting civilian communities.

USO San Diego is a 501 (c)3 non-profit organization, funded primarily by the generosity of the San Diego community.  With two centers, open 365 days a year, USO San Diego is the home away from home for over 150,000 active duty military and their families annually. As well as, Sonshine Haven, an East County after-school recreational program for children, grades K-8.