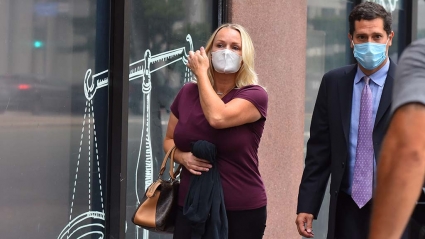 Photo:  Margaret Hunter, wife of former Congressman Duncan D. Hunter, walks past the federal courthouse on Broadway with her attorney Logan Smith after her sentencing on corruption charges. Photo by Chris Stone

Thanks to her “extraordinary” cooperation with federal prosecutors, Margaret Hunter will serve just eight months of “punitive home detention” starting immediately.* Her estranged husband will begin 11 months behind bars in January.

Except for a “yes, sir” reply to a question about accepting her three-year probation terms, that’s all she said in a 17-minute downtown sentencing hearing Monday.

She declined to answer questions afterward.

Two years and three days after being indicted on corruption charges — using almost $250,000 in campaign funds for personal expenses and luxuries — Margaret was shown leniency by Judge Thomas Whelan in the wake of her June 2019 guilty plea to a single count of conspiracy.

In court and afterward, prosecutors took pains to explain the value of Margaret’s cooperation — perhaps aiming to defuse criticism of the light sentence. She potentially faced five years in prison.

Assistant U.S. Attorney Emily Allen said in court that the public should understand how serious her offenses were and that there be a measure of general deterrence.

“But nevertheless, under these very extraordinary circumstances … [no] time in general custody is appropriate here,” she said.

Margaret, 45, testified against a “strong family unit that were all stacked up against her,” Allen added.

This led Duncan Hunter to quit making false claims that the prosecution against him was “fake news, a political witch hunt and … invalid,” she said. “It became impossible for him to make those arguments once Miss Hunter took responsibility. … The years of denials were untrue.”

Unlike Duncan Hunter’s sentencing in mid-March, Margaret’s saw no family members present. The spectator area was limited due to COVID restrictions. Two or three seats separated the 10 media members (and a sketch artist), who all were asked a series of virus questions before entering the Broadway courthouse.

“Not only did she have to withstand being thrown under the proverbial bus by her husband, but she took responsibility,” he said. “She accepted responsibility early and did remarkable cooperation against her husband.  … Today justice was served. This is the end of an important case. The facts are now out — available to all of you.”

Conover declined to speculate on Margaret’s motivations for cooperating so fully and early.

He was asked whether evidence of five Duncan Hunter “romances” played any role in moving Margaret to cut a deal. He said: “We’re not here to talk about any of the romantic aspects of Mr. Hunter or what may have motivated Miss Hunter. … And the reasons [she cooperated] would be something you’d want to ask Miss Hunter.”

Conover also wouldn’t say whether the Internal Revenue Service would go after the Hunters for potential tax fraud or unpaid taxes — which his office didn’t pursue.

He told reporters that Margaret pleaded guilty at “the earliest opportunity we gave” her, where she accepted the plea offer “and cooperated from that point on.”

In court, attorney Logan Smith recalled his client, a native of Poland, came to San Diego at the age of 11, speaking no English.

But since her 1998 marriage to Duncan Hunter, he said, “her defining characteristic … has been her devotion as a mother. During this incredible time,… her focus on her children has only grown as she built a cocoon around them.”

Smith said home confinement would be the best chance for her to rehabilitate herself and move on to a new chapter in her life, and hoped future employers would see her cooperation with government as reflecting her “growth, maturity and character.”

“She’s eager to find a job and obtain a college degree,” he said of the former Hunter campaign manager. “She knows it will not be easy, especially with a criminal conviction,” but is fortunate to have a sister, mother and three children to provide the “support and love just as they have for these tumultuous years.”

Judge Whelan read off a list of probation requirements, including that Hunter not take a job that includes “fiduciary responsibility.” She also apparently has to continue taking medications for mental health.

He said “location monitoring” would be at the discretion of her probation officer. She can leave the house only for “employment, education, religious services” and medical/mental health visits.

Prosecutors agreed with Margaret’s attorneys that the La Mesa mother of three (including two daughters at home) shouldn’t get prison time, crediting her cooperation in the case that led to the six-term incumbent’s resignation from his 50th District seat.

But a legal motion last November by Duncan Hunter’s attorneys cited Hunter's aides as testifying to a grand jury that “virtually all of the spending issues underlying this prosecution began and ended with Mrs. Hunter.”

Allen said the defendant spent most of the funds, but her role was “far less egregious” than that of her husband, who the prosecutor said was “the driving force” behind the crime.

“He was the elected official. He was the person in charge of the campaign and he was the decision maker who chose to allow this to go on,” Allen said.

The 80-year-old Whelan, who rejected a request to have Hunter start home confinement in January, said it was the first time in his 20-year federal judge career (and 3,000 sentencings) that he had seen such cooperation by a defendant, yielding a "5K motion" from prosecutors for a lesser penalty.

Before his plea, Duncan Hunter repeatedly and publicly denied wrongdoing. He attributed more than $1,000 in video game purchases to his son, while later suggesting his wife may have been responsible for the misspending, as she was the campaign manager and in charge of those finances.

“Today we’re reminded that no one is above the law,” Conover said after the hearing.

The prosecutor said the sentence handed down was appropriate because “not only did she have to withstand being thrown under the proverbial bus by her husband, but she took responsibility.”

Conover said that without the wife’s help, prosecutors would have likely had to go to trial in order to secure a conviction against Duncan Hunter.

Her cooperation made many of the facts much more accessible, he said. “She was able to provide context to the prosecution, sit down with FBI agents and explain many of the aspects of the conspiracy.”

This “led Congressman Hunter to understand that he would not escape responsibility for his crime,” according to Conover.

The couple were indicted in August 2018, charged with unlawfully spending hundreds of thousands of dollars on family vacations, restaurant and bar tabs, clothes and other frivolous expenses over the course of several years, while falsely stating to staff that the purchases were campaign-related.

Prosecutors said that despite their lavish spending, the couple were in dire financial straits, overdrawing their bank account more than 1,100 times over a seven-year period.

Amid the charges and public allegations, Hunter was re-elected in November 2018 with 51.7% of the vote in the 50th District, despite being indicted three months prior. He was first elected in 2008, succeeding his father, who held the congressional seat for 28 years.

Margaret Hunter’s sentencing was originally set for Sept. 16, 2019, but was delayed time and again — first because of her husband’s appeal and later as the COVID crisis scrambled court calendars.

“We are dedicated to focusing our efforts, resources and expertise to these complex and sensitive investigations because public officials who use their position for private gain undermine the integrity of government and erode the public’s trust in the very framework of our democracy,” he said. “Today’s sentencing marks the end of a four-year FBI investigation which resulted in felony convictions of former Congressman Duncan Hunter and his wife, Margaret Hunter, for lying and stealing from Hunters’ constituents and undermining the public’s trust.”

*An earlier version of this story incorrectly said Margaret Hunter’s home confinement would start in January.