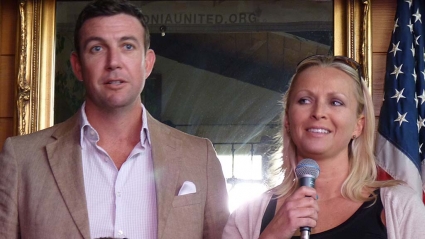 Photo:  Duncan D. Hunter and his wife, Margaret, are seen in La Mesa at 2014 Polonia United event for Polish-Americans in the San Diego region. Margaret is the oldest daughter of Steve and Miroslawa Jankowski, who moved their two daughters to America in the late 1980s. Photo by Miriam Raftery

December 8, 2020 (San Diego) - The estranged wife of former Rep. Duncan D. Hunter is suing for divorce after 22 years of marriage — bringing an end to a family and legal drama that saw her cooperate with prosecutors in the East County Republican’s corruption scandal.

The Hunters have three children — Elizabeth, Sarah and Duncan. One site suggests Elizabeth is 19. Margaret has listed a La Mesa address while her husband has been reported living with his congressman father, Duncan Lee Hunter, in Alpine. 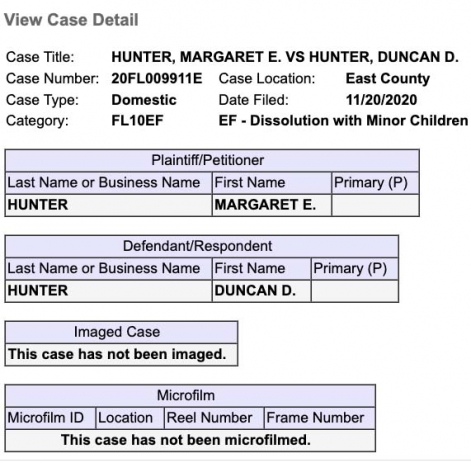 In August 2018, both pleaded not guilty to using more than $250,000 in campaign contributions for their personal use, including lavish vacations and household items. They entered and exited the downtown courthouse separately.

In a Fox News interview that month, Hunter blamed Margaret — leading to critics’ refrain that he “threw his wife under the bus.”

“I’m saying when I went to Iraq in 2003 the first time I gave her power of attorney and she handled my finances throughout my entire military career and that continued on when I got to Congress since I’m gone five days and home for two,” he told Martha McCallum. “She was also the campaign manager. So whatever she did, that will be looked at, too, I’m sure. But I didn’t do it.”

In June 2019, Margaret changed her plea to guilty on one count of conspiracy.

The motion didn’t list names but said the affairs involved three lobbyists, a congressional aide and a member of his staff.

In mid-March, just before the pandemic shutdowns, the former Marine combat veteran of Iraq and Afghanistan was sentenced to 11 months in prison.

The six-term congressman’s prison term was to start in late May but was later changed to Jan. 4, with his attorney saying his prison sentence will be served at Federal Correctional Institute La Tuna in Anthony, Texas.

In December, Hunter pleaded for mercy on behalf of his wife.

“Whatever my time in custody is, I will take that hit,” he told KUSI’s Steve Bosh. “My only hope is that the judge does not sentence my wife to jail. I think my kids need a mom in a home.”

Philip Halpern, part of the Department of Justice team that prosecuted the Hunters, reacted to the news Tuesday,

“Obviously, the Hunters’ marriage was not helped by the former congressman’s decision to ground his defense initially in the act of throwing his wife under a bus,” he said via email. “This tactic — coupled with the public exposure of her husband’s various extramarital escapades — would have eroded the stability of even the most solid marriage.”

Halpern, who recently retired as an assistant U.S. attorney, said the true extent of the Hunters’ marital disintegration “became clear for all to see when they entered the court at separate times and sat far apart.”

“My only surprise is that they didn’t move to dissolve their marriage earlier,” he said.