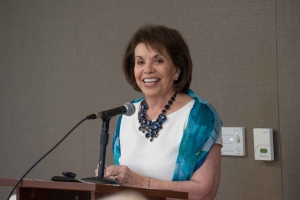 Three additional members named to nonprofit’s Board of Directors

A Boston native, Raftery came to San Diego in 1980 as director of the UCLA Dental Clinic, before opening her own Dental Practice Management Corp. in 1987. She went on to open and manage 10 offices throughout San Diego County. All of the offices were eventually sold, except for one in South Bay that she continues to own and manage.

Raftery was introduced to JFS through a friend who invited her to attend the nonprofit’s annual gala and has been passionate about the agency’s work ever since.

“I saw how JFS served the whole community, from children and parents with its parenting programs and BigPals, all the way through to services for seniors with its nutrition and On the Go programs,” said Raftery. “I knew from my dental offices that when you serve the entire family, you can stay connected and that’s what JFS does.”

Before joining the board in 2014, Raftery served as chair for the JFS Development Committee, as well as its “Friends of the Family” campaign. She and partner Dr. Robert Rubenstein also started the David Rubenstein Memorial Scholarship program at JFS in 2009, which annually grants between 15-20 scholarships of up to $2,500, encouraging students to treasure their Jewish heritage, reflect on their Jewish values, and better understand their connection to the community.

“In January, we begin our centennial year with an outstanding philanthropic opportunity to strengthen our financial base and sustain JFS long into the future. The agency’s board, staff and supporters are proof that talent combined with passion, tenacity and decency can reinvent what’s possible, just as our founders did 100 years ago. As we move forward, I want to make sure we never forget how deeply we believe in the work JFS does to improve lives and strengthen our community,” said Raftery.

Raftery follows outgoing Board Chair Meg Goldstein who had served for two years.

In addition to Raftery, JFS also added three new members to the board:

For a full list of Jewish Family Service of San Diego’s Board of Directors, visit www.jfssd.org/about.

Since 1918, Jewish Family Service of San Diego has been a trusted community resource for individuals and families working to build better lives. Operating throughout San Diego County and the Coachella Valley, the agency’s integrated services are focused around three goals: Empower Individuals & Families to Move Toward Self-Sufficiency, Support Aging With Dignity, and Foster Community Connection & Engagement. Many people first turn to Jewish Family Service with a specific need, such as job coaching or transportation, and that first contact often leads to a wide range of services, including counseling, education, nutritious meals, social connection, and more. JFS was named a 2016 California Nonprofit of the Year and has earned a ninth consecutive 4-star rating from Charity Navigator, America’s largest independent charity evaluator that highlights the work of efficient, ethical and open charities. To get help, volunteer, or to learn how JFS empowers change in our community, visit www.jfssd.org.