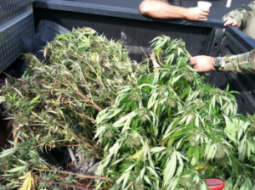 October 3, 2013 (Ramona) – The San Diego Narcotics Task Force served search warrants and seized over 8,500 marijuana plants being grown illegally at three outdoor locations on September 24 and 25.   The crops had a cash value of $4.6 million and caused damage to an ecological preserve and open spaces, according to the Sheriff.

In Ramona, 354 marijuana plants were found growing in an open space at Wildcat Canyon and San Vicente roads.  Detectives also found and destroyed over 8,000 plants in the Gopher Canyon area of Vista and 40 plants in the Santa Margarita Ecological Preserve in Fallbrook.

At the Vista location, detectives also found an encampment and an illegal dumping site for trash, pesticides and chemicals.