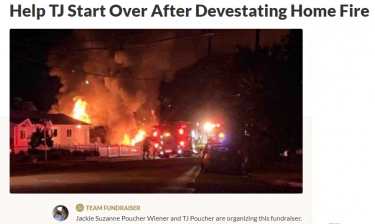 A GoFundMe site has been set up to help T.J. Poucher recover from the devastating fire

October 28, 2019 (Poway) – T.J. Poucher, a Marine Corps veteran, awoke to a chemical smell and a choking feeling last Saturday night.  Cracking open a door, he was blasted by heat “like a jet engine” that singed his hair and face, he told NBC 7.

Fortunately, his military training as an infantryman kicked in. “We thrive in chaos,” says Poucher, who knew he needed to break a window immediately. He escaped with his dog but burned his feet on the smouldering grass outside.

Poucher is grateful that his teenage children were not there during the fire, but the blaze destroyed everything else – a lifetime of memories gone, along with his work truck, his equipment needed for his fish tank cleaning business, two saltwater aquariums filled with fish and coral, and more.

Poway Fire Department and San Diego Fire prevented the fire from spreading to neighboring homes and saved a bunny owned by Poucher’s daughter, but the home was a total loss.

Poucher had no renter’s insurance, according to his sister, Jackie Suzanne Poucher Wiener, who started a GoFundMe page for her brother.

She says her brother is a generous person who has often given to help strangers. “From ALS to people hurt by natural disasters and people he sees on the street – he’s always helping others,” she wrote.

Now she hopes that others will step forward to help her brother in his time of need. She is striving to raise nearly $20,000, of which over $11,000 has been donated so far.