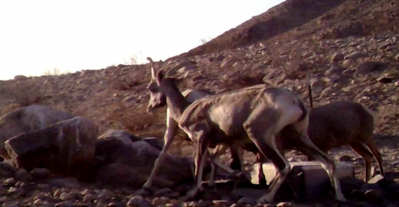 October 23, 2021 (San Diego’s East County) – The drought has dried up watering holes and vegetation that the Anza Borrego Desert’s iconic bighorn sheep rely upon.  Scott Gibson with the Society for the Conservation of Bighorn Sheep told ECM, “Endangered bighorn sheep mortality due to dehydration has been documented recently."

Fortunately, the U.S. Marines came to the rescue – with help from several nonprofit organizations and state agencies. In September, a Marine Corps helicopter crew made the first-ever helicopter water delivery to Anza-Borrego Desert State Park.

Click here view a video by David Owen Hawxhurst, www.hawxhurtst.com and scroll down for details.

Videographer Hawxhurst says, “It’s a fascinating project with so many great people involved.”

Gibson says, “Over 50 people worked in the field to make this water haul possible.” That includes helicopter and ground crews, as well as people who worked behind the scenes to obtain permissions and funding.

On the same weekend, water deliveries were also made to Sheephole Mountains to fill guzzlers at the 29 Palms Marine Base.

In Anza-Borrego, the helicopter made a dozen round-trip flights to the Whale Peak guzzler to deliver an estimated 1,400 gallons of water. Though guzzlers have been in existence for over 50 years, this is the first time that the military has conducted this type of operation.

Gibson says there is “no doubt” that the ewes and lambs that rely on this water source “were saved because of the water haul.”

Wildlife biologist Janene Colby from the California Dept. of Fish and Wildlife “really put the project in motion when she  reached out to our organization for help,” says Gibson.

The Society for the Conservation of Bighorn Sheep was the lead nonprofit and organizer, helping to overcome hurdles. For example, when the Marines lacked a critical piece of gear to “long line” their water dropping bucket, rather than wait months to procure one through normal channels, the society reached out to the California Chapter of the Wild Sheep Foundation to purchase the long line weights needed by the Marines.

“They had to be custom made and rush ordered,” says Gibson, adding that the gear arrived the night before the water drop.

Organizations involved in this effort include: