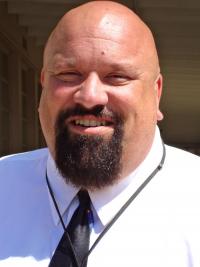 October 15,2014 (La Mesa) – Councilman Mark Arapostathis, twice named Teacher of the Year (by the County and La Mesa-Spring Valley School District), says a lesson he’s taught his students for 23 years is to always “be positive.”  He’s running against long-serving Mayor Art Madrid and says that if elected, he wants to bring “greater unity to the Council, which has been a bit divided.”  He holds a PhD degree and also heads up the Peter Pan Jr. Theater and C. Hook Theatre programs.

He’s served on the La Mesa City Council for eight years.  Now with a term limits initiative on the ballot, he observes, “My window of opportunity may close” to run for mayor, since passage of the measure would limit the ability of long-serving council members to later run for mayor.

Asked to name his greatest strength, Arapostathis, known as “Dr. A” to students and friends,  responds, “uniting people no matter what their background is or their political slant.”  As for how he defines leadership, he says, “I’ve been a leader of many organizations. Leadership begins with service, and service means being able to unify people.” In addition, he believes in “listening first, making decisions second,” as part of his leadership philosophy.

Asked to name the main areas where he agrees with Mayor Madrid, Councilman Arapostathis replies, “Where we agree is we both care about the city and its citizens and we want this city to thrive.”

Asked key areas where he disagrees with the Mayor, Arapostathis pauses, then replies, “I don’t know where we disagree.”

Still he believes it’s time for a leadership change. “The Mayor’s been on the Council since I was in middle school,” he recalls, then names one difference between himself and the current mayor:  “I’m currently working and he’s not. He’s retired. “

Mayor Madrid says he puts in 60 hours or more each week as mayor, and has said that the job needs full-time attention.  But Arapostathis disagrees.  I’ve asked former city staff members, can a person working still be mayor? Senior staff said `Undoubtedly, yes,’”  says the full-time teacher, who also directs both the Peter Pan Jr. Theater and C. Hook Theatre programs, which add rehearsals and shows to his busy agenda.

Councilman Arapostathis observes, “We live in the 21st century. To be mayor or on the council, you need to be out in the city.”  He sees his interactions with students, parents and the public through his work as positive attributes, and believes he can be in touch via text messaging and phone to handle any issues that may arise at City Hall. He adds, “I’m going to give 100% of my time in La Mesa. Yes, I teach during the day. I live in La Mesa…I see a thousand La Mesans a day and they share their ideas and concerns. I’m in constant contact with staff.” He adds that should an emergency arise, he is just minutes away.

He views development issues as among the most important topics facing La Mesa’s next mayor.  “We’re an infill city. We’re built out, so how we get into developing old properties into new ones is important,” he says.

A hot issue in La Mesa is whether or not the controversial Park Station 11-story high-rise project should be granted a variance from the city’s four-story height limit in the General Plan.  Council members are prohibited from voicing views on specific projects that may come before them for a vote.  But Arapostathis says he checked with the city attorney on what he can say on the issues surrounding this and potentially other projects.

“I believe that we have to follow the general plan,” says Councilman Arapostathis, citing restrictions on height and density. “La Mesa has a small town feel,” he adds. “Our city has a distinct look and character. People move here because of that; we need to stay consistent.”

The other top issue for La Mesa, in his view, is public safety.  “We need to keep building up Neighborhood Watch,” he says. “The way to discourage crime is by neighbors helping neighbors. We’ve done that,” he adds, noting that the City has increased Neighborhood Watch programs in recent years to help close safety gaps for the police.

Mayor Madrid has been a vocal advocate for building a new city hall.   Arapostathis has indicated in a recent candidate forum that he thinks it’s unlikely this would be a priority . However in our interview, he said that the new library when built in 2006-2008 was intended as a temporary facility, with a goal of eventually moving it to where the farmer’s market is currently held.  “Possibly that could be a new city hall,” he says.

If a new civic center is built, he says, “it should have an auditorium.”  A theater for La Mesa is a dream of his, though cost likely makes it prohibitive. But he adds, “If I was a billionaire, I’d buy the old AT&T facility and turn it into a theater.”

Asked his definition of smart growth, Arapostathis says it means more mixed use, with residential above and commercial development  below.  “Smart growth also means to be walkable—can you walk to major transit centers?” he adds.

He says that in walking neighborhoods during his campaign, he’s getting a lot of questions. “Development is not done unilaterally,” he says, noting that traffic studies and another analysis are first done.  Contrary to popular belief, he says, traffic on Fletcher Parkway has actually gone done since newer multi-story apartments were built along the trolley line.

Asked about the future of Grossmont Center, which the Cushman family is taking back management of, Councilman Arapostathis says the new management is renewing leases “so it’s going to look like Grossmont Center for years to come.”  But he quips, “I think it’s going to change as we move away from brick and mortar shopping to online shopping with Jeff Bezos (Amazon.com’s CEO) dropping packages from the sky, but people will still shop and go to restaurants and theaters.”

Mayor Madrid has been outspoken in his belief that climate change is real, man-made, and that cities need to take action to reduce green house gas emissions.

Asked his views on these issues, Arapostathis replies, “I do believe we all need to reduce our carbon footprint.” He added that he challenged his class to do more recycling and “more aware of our environment and what we can do personally do to reduce our impact on the environment.”  He adds that Council has given staff directives to switch to cleaner fuels and greater fuel efficiency when it comes time to update the city’s vehicle fleet “right down to the brake pads” as well as “using solar whenever we can.”

As for the city’s finances, he praised voters for approving Prop L.  “Without Prop L, very likely we would be right on the margin looking over an abyss,” he says. Thanks to Prop L, the city has not had to lay off anybody due to budget constraints, he adds, though in some cases one staffer is now doing two jobs.

Overall, he says the city’s finances are “healthy” and the city is meeting its reserve goals. “We are looking for opportunities to be fiscally responsible,” he says, citing the merger of the city’s fire department with Heartland Fire in El Cajon and Lemon Grove as an example. “The same type of model could be developed with police dispatch,” he adds.

“Also we voted for 100% cost recovery; if someone wants to rent our streets,  Christmas in the Village for example, they have to come up with that,” he notes.  If the economy recovers to the level it was at before the recession, Arapostathis says he would consider granting exceptions on a case by case basis.

On pensions, he says the city staff has done “everything we need to do” to make sure that “bills will be paid and the city is still running.”

Mayor Madrid has pointed out his experience in finding grants for the city to help with funding key projects.  Arapostathis says he, too, has experience in writing educational grants but notes that “staff does all the writing grants and investigating grants.”

A bone of contention on the council has been funding for travel; council has voted to limit travel funds for the mayor to attend events such as the U.S. Mayors Conference.

“I think travel should be distributed equally,” says Councilman Arapostathis, who wants to let all council members take turns attending key functions as “the way to have an informed council.”  Similarly he wants to divide up service on boards and commissions.  “I’m not against the mayor traveling, but I support full transparency,” he added. “We recently had a vote to put the city’s finances online; now you can dig down and see where your tax dollars have been spent.” The city has also opted for full reporting on crime reports, far beyond what most cities report, he notes.

Arapostathis’ website states his support for preserving Prop 13 protections for property owners. He says this is an issue on which his views have changed.  “I hated Prop 13 as a child,” he says.  “I lost sixth grade camp as a fifth grader.” But now that he’s a homeowner, he says, “I could not afford to keep my home without Prop 13, and that’s the same for those on fixed incomes.” Though not directly within the purview of a local mayor, he says if elected “I will be pounding my state officials” to protect Prop 13.

Mayor Madrid is known for his accessibility to voters, passing out cards with his cell phone so voters can easily reach him.

Asked why his campaign website does not list an e-mail address or phone number for voters to contact him (only a donation link is listed for contacts), Arapostathis  voiced surprise and said this was an oversight he plans to correct, though as of press deadline, it hasn’t changed.  “I always return my calls within 24 hours,” he says of his accessibility as a Council member, adding, “I also make home visits all the time; to be honest my home visits are usually after work”  which members of the public may find more convenient, he suggests.

He believes his most important endorsements are  the other council members in La Mesa, along with Supervisor Dianne Jacob and the many parents and grandparents of students he has taught.

Though the race is nonpartisan and both candidates are registered Republicans, Arapostathis sought and obtained the San Diego County Republican Party endorsement.  But he states, “I think you should always vote for what you think is best for the City of La Mesa regardless of your party, and I have.”

He believes that voters are tired of negative campaigning, and says his campaign is taking the opposite approach, avoiding criticizing his opponent.

“I’m just being as positive as I can, talking about myself,” the teacher-turned-Councilmember concludes.