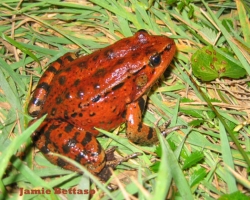 July 8, 2014 (Sacramento)-- Mark Twain made it famous, and now the California red-legged frog is about to become the state's official amphibian.

Governor Jerry Brown has signed legislation that recognizes the star of Twain's 1865 short story, "The Celebrated Jumping Frog of Calaveras County." Dr. Kerry Kriger with the Berkeley-based nonprofit Save the Frogs says this will ensure California students learn more about the species' important place in the ecology, culture and history of California.

"Amphibians have traditionally been neglected in education, so this will bring the plight of the red-legged frogs directly to tens of thousands of California students," says Kriger.

The new law goes into effect at the beginning of 2015, and will elevate the frog as a state symbol alongside the grizzly bear, desert tortoise and golden poppy. The red-legged frog is the largest native frog in the western United States and is found almost exclusively in California.

Once abundant during the Gold Rush, the species now faces dozens of natural and manmade threats, including the introduction of invasive species and habitat loss. The red-legged frog is considered a threatened species under the federal Endangered Species Act, but Kriger says the new state designation will go even further in helping the species recover.

"It'll make it more difficult for people to harm the California red-legged frog because Californians will be more prone to protect the species and care about the species since it is our official state amphibian," says Kriger.

The legislation came together as an after-school project for students at Sea View Elementary in Salton City, a small town on the western shore of the Salton Sea in Imperial County. The students rallied behind the effort and contacted Assemblyman Manuel Perez, asking him to author the bill.