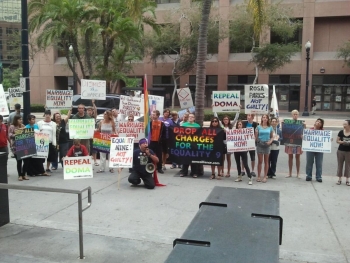 August 25, 2011 (San Diego) – Mike Kennedy of Encanto was among nine same-sex marriage advocates arrested last year on August 19, 2011. Kennedy and his partner had an appointment to be married at the County Clerk’s office downtown after a federal judge ruled Proposition 8 unconstitutional. But since the decision was being appealed, the County Clerk refused to marry same-sex couples. Kennedy and others who staged a peaceful sit-in protest were arrested.

Now the City is pressing charges—and Kennedy joined a group of protesters who staged a rally Friday asking that the charges be dropped. “I felt it important to take a stand because, as a gay man, I am subjected to many forms of discrimination all the time,” Kennedy told ECM in an exclusive interview.

He cited “homophobic comments” and problems accessing healthcare information from doctors when his significant other is ill. “When the discrimination is blatant and is being perpetrated by our government…I cannot see it as anything other than a call to action to demand change ,” he said. “I am now 46 yeasr old and have learned the life stories of many members of the LGBT community. I am well aware of the pattern of how their lives (and to a large extend my own life) were, at a minimum, derailed and at worst, destroyed,” Kennedy added.

Around 50 protesters turned out Friday at a solidarity rally organized by San Diego Alliance for Marriage Equality. Demonstrators urged urge that charges be dropped against the ‘Equality 9’ with a demurrer, on grounds that charges are “inappropriate for the defendants who were engaged in constitutionally protected First Amendment free speech, and that City staff did not have a right to remove them from public property,” wrote Gerald Blank, Esq., an attorney for one of the Equality 9 members.

At the hearing, the judge declined to drop charges. However, Sean Bohac with SAME noted, “The judge mentioned that the prosecution would have a difficult time winning this case.”

A new hearing has been set for October 17 at 9 a.m. at the County Courthouse.

“It’s a shame that, at a time when people are struggling financially, the city is wasting so much money prosecuting peaceful protestors,” observed SAME member Zakiya Khabir.

Before the sit-in, U.S. District Court Judge Walker ruled, “Because Proposition 8 disadvantages gays and lesbians without rational justification, Proposition 8 violates the Equal Protection clause of the U.S. Constitution.” But a stay was imposed by the 9th Circuit Court of Appeal until defenders have completely exhausted their appeals. Prop 8 proponents claimed that a stay was needed to prevent legal complications that would ensue if same-sex couples married only to have a legal cloud cast over the unions should Prop 8 be upheld on appeal.

Proposition 8 mandated that marriage be limited to a man and a woman, overturning a state Supreme Court ruling which found same-sex marriages to be constitutionally protected and legal. Proponents of the constitutional amendment, primarily religious conservatives, argued that exclusively heterosexual marriage was "an essential institution of society.”

In recent months, the Obama administration voted to end “Don’t Ask, Don’t Tell” in the military and signaled it will no longer defend the “Defense of Marriage Act” at the federal level.

“With the edifice of official discrimination crumbling all around us,” SAME’s petition concludes, “The City should not persecute activists who are proving to be on the right side of history.”