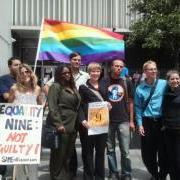 April 30, 2012 (San Diego) — Marriage equality activists charged with misdemeanors from an August 19, 2010 protest will be in court Monday morning. The “Equality Nine” are nine protesters who were arrested during a peaceful “sit-in” for marriage equality. Jury selection begins in their case Monday, April 30 at 10 a.m. before Judge Joan P. Weber in San Diego County Superior Court, 220 West Broadway, in downtown San Diego.
The opening arguments, scheduled to begin on Monday afternoon, are expected to outline the first amendment and LGBT [Lesbian, Gay, Bisexual and Transgender] justice ramifications of this trial.

The Equality Nine are being charged with two misdemeanors each: failure to disperse, and interference with the business of a public agency. The latter charge is based on California Penal Code section 602.1b, a law which contains a clause which states “Section b shall not apply to any person on the premises who is engaging in activities protected by the California Constitution or the Constitution of the United States.” Judge Weber has refused to allow this issue at trial, but the question of whether a law that specifically exempts constitutionally protected free speech from its application is likely to be a major issue in any future appeals.

Though Proposition 8 was ruled unconstitutional in a landmark federal case, it was, as still is, in effect due to a Ninth Circuit Court stay. On the day of their arrest, community members came to the County Clerk’s office with three same-sex couples who intended to request marriage licenses. One of the couples, Tony and Tyler Dylan-Hyde, who had booked an appointment to get married that day arrived with legal arguments explaining why, in their view, the County Clerk could marry them despite the stay. When they arrived at the clerk’s office though, they were blocked from even entering. An hour later the group was confronted by 50 San Diego County Sheriff’s deputies in full riot gear; ultimately nine San Diego Alliance for Marriage Equality (SAME) members were arrested.
Jose Medina, a member of SAME asks "Why is the city wasting public money and time prosecuting people engaged in peaceful protest for LGBT equality? Peaceful protest is a protected right under the US Constitution! I looking forward to hearing the reason why the sheriffs felt they had a right to interfere with the constitutional rights of these people".
The City Attorney's office has indicated that it is issuing subpoenas and flying witnesses in from as far away as Florida to press their case.
“Its shocking, at a time of such budget cuts, that the City Attorney Jan Goldsmith is continuing to press these charges, its too costly to play these ego games on the City's dime.” said Ann Menasche, another member of SAME, “Furthermore, its important that people maintain the freedom to protest peacefully in order to preserve our democracy”. Many agree with Menasche, over three thousand people have related their support for the Equality 9 or sent messages to the City Attorney urging him to drop the charges though petitions or letters.
A rally organized by SAME and Canvass for a Cause is planned outside the courthouse from 8 to 9 a.m. Monday. Community members are invited to join the rally and then join the Equality Nine in Judge Weber's court throughout the rest of the week in Department 51.