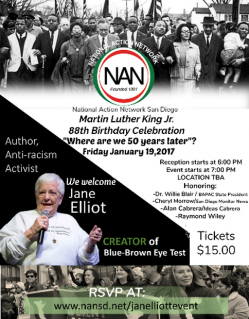 NAN is also organizing a “100 ministers and the people” march Jan. 15

“Where are we 50 years later?”  a celebration honoring civil rights leaders will be held on January 19 at the Lemon Grove Community Church “the Lagoon”, 3122 Main Street in Lemon Grove.  Doors open at 6 p.m. with a 7 p.m. start.  The event will feature guest speaker Jane Elliott, an anti-racism activist who will discuss her historic brown eyes-blue eyes exercise. Honorees will include BAPAC State President Dr. William Blair, Dr. Cheryl Morrow of the San Diego Monitor newspaper, Alan Cabrera of Ideas Cabrera, and Raymond Wiley, a 67-year-old African-American man who has contended he was racially profiled by a San Diego police officer in 2017.

In addition, to commemorate what would have been Dr. King’s 88th birthday and set an agenda for the new year, NAN will hold its second annual Martin Luther King Jr. Day march highlighting “100 ministers and the people.”

Reverend Shane Harris, president of NAN San Diego, has stated that “San Diego’s Martin Luther King parade no longer represents the values and tradition Dr. King stood for” and noted that NAN’s march is welcoming everybody to be a part without paying a contingency fee.

The annual King Day March organized by NAN will highlight issues Dr. King stood for; participation is free.  It will be held January 15th starting at 2:30 p.m.  Participants should meet at 2 p.m. at Park Blvd. and B Street in San Diego. They march will go down B Street to San Diego City Hall for a rally.

The rally after the march January 15 will highlight four main issues for 2018: homelessness, jobs, voting rights and criminal justice/police reform.