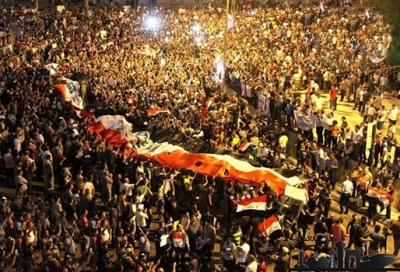 August 15, 2015 (El Cajon) –This photo is not in Egypt nor Tunisia.  The scene is Iraq, this month, where demonstrators are calling for an end to corruption and a return to secular government amid scorching temperatures that have reached 122 degrees.

A solidarity rally is planned today in El Cajon from 6 to 8 p.m. at 201 East Main Street.

“Mass demonstrations were triggered in Baghdad by lack of electricity and unbearable heat in August,” linquist Camilia Sadik told East County Magazine, also providing photos taken by her friend in Baghdad.  “They began in Tahreer Square in Baghdad on August 1 and then spread all over Iraq.  Two major slogans are `In the name of religion, we were burglarized by thieves” and “Yes to secularism, No to Shiites, no to Sunnis.” 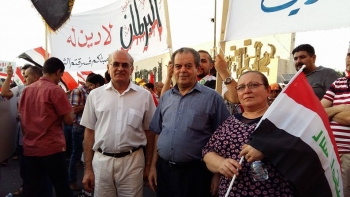 The demonstrators threatened the government that if their needs weren’t met, they would march into the Green Zone within seven days, Sadik added.  “Their demands are to remove the corrupt parliament, ministers, and leaders like Maliki.”

Organizers of today’s demonstration say that all are welcome to join and support Iraqi people achieve peace and justice, said Sadik, who forwarded this message that she received from a group calling itself the Iraqi Democratic Current:

“The Iraqi Democratic Current (Movement) in California invites you to participate in a vigil of solidarity with our Iraqi people rebelling against corruption in government and for the political reforms to rebuild democratic federal civil state and to support initial reforms approved by the Council of Ministers and the House of Representatives. It will be from 6-8 pm on Saturday 8/16/2015 in the City of El Cajon, north of the Library. We hope that you participate in our solidarity with our people in order to eliminate the sectarian and ethnic divide corrupt system.”

Voice of America News reports that Iraqis blame days-long power outages, salty water and shortages of basic goods largely on corruption, which has left the Iraqi government unable to function efficiently, an underlying cause of the Islamic State (ISIS) rising to power. Corruption is also related to the Iraqi army’s apparent inability to beat back the militants, despite support from the U.S.-led coalition, VOA indicates.

The protests are having some results.  Since the demonstrations began, Prime Minister Haider al-Abadi has promised widespread reforms, and this week began firing high-level officials he deemed corrupt, VOA reported yesterday.

Renad Mansour, a Carnegie Middle East Center scholar, told VOA that anti-corruption reforms, if successful, could help bring services to the people and enable the army to fight terrorist insurgents. But that’s a big if, since corruption is deeply entrenched in many Iraqi institutions and efforts to block reforms should be anticipated.

But Mansour observes, the mass demonstrations and demands from the public now allied with some religious leaders is forcing officials to at least publicly support reforms.  He concludes, “There is a serious force that’s driving this initiative,” he explained.

On Friday, about 100 Iraqi-Americans rallied in the Detroit area, a hub of Iraqi immigrants in the U.S. , the Detroit Free Press reported.

Demonstrators in Detroit voiced frustration with both Iraqi and U.S. officials.  Protesters met with Al Manhal Al Safi, the Consul General of Iraq in Detroit  and presented him with a letter written on behalf of about a dozen Iraqi-American organizations.

It read in part that “the fundamental solution to the crisis in Iraq lies in putting the political process on the right track to end the sectarian and ethnic divide, monitor the performance of the government, and hold the corrupt accountable. The politicians must respect the national identity of all Iraqis; respect the ethnic, religious and culture diversity of the people.”  The letter was also reportedly sent to U.S. Senators and House Reps. in Michigan.

Dr. Jacob Mansour, an Iraqi Chaldean Christian, voiced concerns that the U.S. and other nations have not done enough to stop the genocide of religious minorities at the hands of ISIS.

“No one is doing anything to help our people,” Mansour told the Detroit Free Press. “ISIS is killing our people.”

Nabil Roumayah, head of the Iraqi Democratic Union in the Detroit area, said the protests have been diverse, reflecting a unity that’s needed for Iraq to progress.. “We don’t want corruption.

San Diego’s East County is home to an estimated 40,000 or more Iraqi Chaldean Christians, as well as many other Iraqi immigrants of other faiths. In July of last year, an estimated 2,000 community members came together in El Cajon calling for unity to save Iraqi Christians, as East County Magazine reported. That rally included speeches from local religious leaders of multiple faiths as well as Mayor Bill Wells