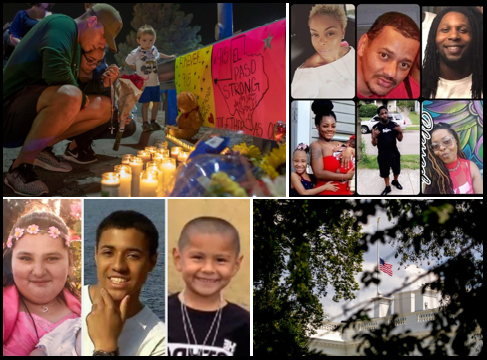 By Miriam Raftery
Photo: Mourners in El Paso, Texas; victims of mass shootings in Dayton, Ohio and Gilroy, California; White House flag at half mast
August 5, 2019 (San Diego) – After posting a violent anti-immigrant manifesto on the same white nationalist hate site used by the Poway synagogue shooter, a heavily armed gunman wearing body armor opened fire at an El Paso Wal-Mart on Saturday with a military-style assault weapon. He slaughtered 20 people and injured 26 more before police arrested him.
The action came just days after a mass shooter in California gunned down 17 people, killing three of them. Shortly before his deadly rampage, he posted on Instagram urging people to read a white nationalist book promoting racial violence. Police shot the Gilroy gunman within minutes of him opening fire, though the coroner concluded he died of a self-inflicted gunshot wound.
Outside a night club in Dayton, Ohio Saturday night, just hours after the El Paso shooting, yet another deranged white gunman killed 9 people, including 6 African-Americans and his own sister. Police have said many more would have died given his large magazine capable of firing 100 rounds, had police not arrived within one minute and fatally shot the gunman.  His former classmates described him as “dark and depressive.” He repeatedly threatened gun violence against fellow students, reportedly keeping a “hit list” of male students’ names and a “rape list” of women.
According to the Gun Violence Archive, 253 mass shootings have occurred in the United States so far this year, through August 4th.
Yet Congress has remained paralyzed, doing virtually nothing to address gun violence despite such national tragedies as the Sandy Hook elementary school massacre in 2012 and the more recent slaughter of Parkland High School students in Florida, a mass shooting at a gay night club in Orlando, Florida, and another at an outdoor country music concert in Las Vegas, to name just a few examples.
The shootings in the past week make one thing clear:  the “solutions” pitched by both sides are inadequate as stand-alone fixes to halt the carnage.  Texas is an open-carry state, but no “good guys with guns” emerged from the crowd at Walmart to stop the shooter.  California has strict gun control laws banning assault rifles, but the shooter simply purchased one legally in Nevada, then smuggled it illegally into California. The Ohio shooter had a long history of threatening gun violence and likely mental illness, yet still managed to gain access to a weapon of mass destruction.
Condolences offered up by the National Rifle Association and prayers from politicians who take no other actions, do nothing to stop the loss of innocent lives – including this past week alone, a little boy, two parents who died shielding their young child, and many others who did not deserve to die.
So what can be done?
First, the President could order U.S. intelligence agencies to make domestic terrorism a top priority, including infiltrating and combatting violence by white nationalist/white supremacist groups.  Yet his administration has done the opposite, gutting Homeland Security programs originally set up after 9/11 to focus on domestic terrorism.  Meanwhile the FBI has considered white nationalism its lowest priority, several intelligence agency veterans told the news magazine Daily Beast. The Countering Violent Extremism Task Force within the Department of Homeland Security has been gutted under the Trump administration, its budget slashed from $21.5 million to less than $3 million, the Atlantic reported recently. The National Suspicious Activity Reporting Initiative is also seriously understaffed, intelligence sources told the Daily Beast.
Even before the Trump presidency, domestic terrorism has been on the rise from sources other than Muslim extremism. From 9/11/2001 through 2016, “far-right extremism” accounted for 73% of lethal extremist violence in the U.S., according to a 2017 Government Accountability Office Report. That’s escalated even more during the current administration. 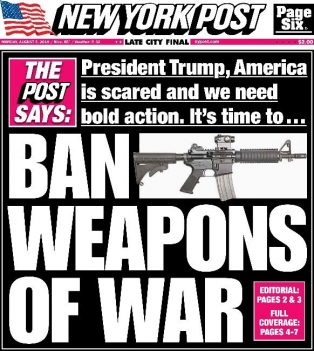 Second, the assault weapons ban could be reinstated. Despite objections on 2nd Amendment rights, the ban previously authored by Senator Dianne Feinstein (D-California) was upheld by the courts but allowed by Congress to expire. Since its expiration, mass shootings have again proliferated. President Trump and Republicans in Congress have voiced universal opposition to any form of gun control.  But today, even the New York Post, owned by Fox News owner Rupert Murdoch, came out with a blaring front page headline which reads, “President Trump, America is scared and we need bold action. It’s time to…BAN WEAPONS OF WAR.” Inside, the Post’s editorial explicitly calls on a ban on assault guns such as those used in this week’s killing sprees.
The President has contended that gun owners “enjoy” shooting for pleasure with semi-automatic rifles such as mass shooters often use. But America has long banned or restricted other activities enjoyed by some for the protection of the greater good. Some people love driving fast, but the government imposes speed limits, for example, to save lives.
Trump has blamed “mental illness” on the recent gun rampages but has adamantly refused to consider gun control. In a speech this morning, for the first time he denounced white supremacy specifically, stating “These barbaric slaughters are an assault upon our communities, an attack against out nation and a crime against all of humanity,” Trump said. “Hate has no place in America. In one voice, our nation must condemn racism, bigotry and white supremacism.”
But critics accuse the President of using racist terminology, retweeting statements from white nationalists and even inciting violence.
Democratic Presidential candidate and Texas Senator Beto O’Rourke, who is from El Paso, told a grieving crowd at a vigil Sunday, “ “We have a president right now who traffics in this hatred, who incites this violence, who calls Mexican immigrants rapists and criminals, calls asylum seekers animals and an infestation.”  He urged the media to “connect the dots” regarding Trump’s actions.
At a recent Florida political rally, when Trump asks what could be done to stop what he calls an “invasion” of immigrants from coming here, someone in the crowd shouted, “Shoot them!”  Instead of denouncing this, Trump laughed, then said “You could only get away with that in the Panhandle.”  After a white nationalist drove a vehicle into a crowd and killed a woman at a neo-Nazi led by torch-carrying, swastika-emblazoned white nationalists in Charlottesville, Trump infamously stated there were “very fine people on both sides.”  He has denigrated Mexican immigrants as rapists and murders and referred to black members of Congress as having “infested” districts, a code word often used by racists though the President has said he was referencing rats.
All of that said, Trump’s point about mental illness as one cause of the shooting sprees is worth noting.  A link between psychiatric drugs and mass shooters in recent years has been documented, though medical privacy has prevented a full vetting of every shooter for prescription drug use. Democrats have long called on background checks for gun sales to include mental illness as well as criminal records, restraining orders and threats of violence. Even some Republican leaders are now calling for “red flag” laws that would allow concerned family members to ask that a potentially violent relative be prohibited from buying a gun or have it confiscated if a mentally unstable person already owns one.
Democrats have attempted to pass measures in Congress to address gun violence, but the Republican-controlled Senate led by Mitch McConnell has refused to allow any of them to come up for votes.  The Republicans have passed no legislation to address gun violence, except for a restriction on bump stock sales signed into law by President Trump after the Las Vegas concert shooting.
There is, of course, no one-size-fits all solution that would prevent all mass killings. Neither a wholesale weapons ban or a blanket open carry would be 100% effective, nor would background checks catch every individual with a disintegrating mental state or simmering rage. Beefed up investigating of hate groups recruiting would-be killers online would likely stop some, but not all potential mass murderers.
But one thing is certain: doing nothing will assure the rampage continues.

Just got the sad news that Greg Palast's, whom I have written a couple of reviews of his books, producer's cousin "Tee Jay" was one of the 9 victims in the tragic massacre in Dayton. Palast was actually at his wedding when he got the news.

His producer was their ring bearer and was still in Europe after the wedding when this sad news came in.  Six of the nine victims in Dayton were African-American, FYI.   No one is safe anywhere in America until we addresss the grave problem of gun violence.

Driving home Sunday on Mt. Helix, I heard gunfire - 7 shots - and called police. So did many others.  We should not have to live in fear in our communities, or when going to public places such as malls or restaurants, or fear for children in our schools.