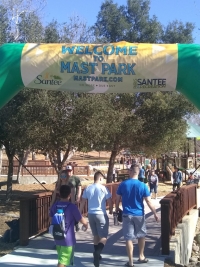 Story and photos by Mike Allen

The wait is over. After 13 months of reconstruction, Mast Park reopened Feb. 1 to hordes of Santee residents who were nearly universally happy about the results.

“I like it but I can’t wait until all the people are gone,” said Olga Buhler, a 24-year resident of Santee who frequents the park on daily walks. “I’ve been waiting, waiting, every day…They did a super job.”

“It looks beautiful,” said Michael Ranson, who lives nearby in the Santee Lakes neighborood. “This looks a lot more open, brighter, and safer. They did an amazing job.” 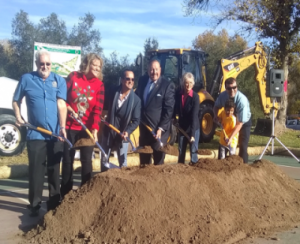 Mayor John Minto said he didn’t check out the park before the official ribbon cutting day on purpose. “This is the first time that I’m seeing it. I can’t believe it,” he said. “I used to ride here with my wife on our bikes, and we’d just keep going. Now there’s something for me here.”

Indeed, there’s something for everyone, Minto said.

The 29-acre park, Santee’s oldest, got a makeover that features some 7,000 different trees, shrubs and plants. The mature oaks and sycamores were retained and lots of newer, more resilient varieties were installed, said Tom Romstad, a city staffer with the community services department. 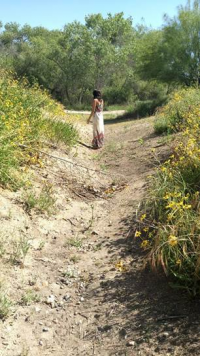 “We were trying to make a park that’s more open, and have trails that are welcoming. We want to bring families here,” Romstad said.

Towards that end, families were trying out a variety of playground equipment, some familiar and some innovative such as the nature discovery area that makes use of dead trees. Mike Pittman, who lives close by and was attending the event with his young son and wife, called the renovation remarkable. “The landscaping, the disk golf course, all this vegetation is much better than what they had before,” he said. 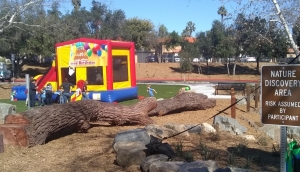 More than a few residents pointed to the new dog park that segregates dogs according to their size as a neat feature. “That’s one of the biggest (dog walking areas) I’ve seen in any of the parks I’ve been to,” said Lynda Marrokal, who also liked the new concession stand called Burgers, Bones, and Beer.

Mast Park now offers three picnic pavilions that can be reserved on an hourly basis with the city starting Feb. 8. If a pavilion isn’t reserved it will be available on a first-come, first served basis.

The city is also offering to rent a children’s bouncy house for special occasions.

Three colored trails allow walkers to determine if they want to go about a quarter mile, half mile, or nearly full mile, or do a combined trail that will total whatever distance you desire.

Of course the basketball court was remade, and was getting plenty of action from hoopsters while residents heard elected officials make speeches on the sun-splashed green 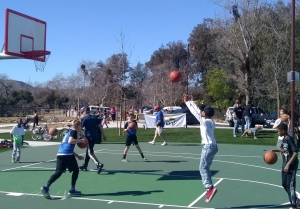 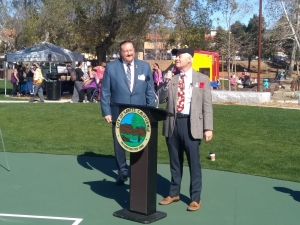 Minto and others noted the $12.4 million cost for the Mast Park remake was done mainly through fees and contributions from developers, which provided about $9.6 million. The city got $2.5 million in grants, including $1.9 million from the San Diego River Conservancy. The city’s General Fund contributed just $333,000.

While Assemblyman Randy Voepel said the state didn’t give a dime, a breakout provided by the city showed California actually gave $321,000.

The park is a part of a comprehensive 52-mile trail system that will eventually connect the San Diego River from its beginnings in the Cuyamaca Mountains to its mouth in Ocean Beach.

A large part of the project’s cost went towards an innovative storm drain system intended to trap debris from clogging the river and giving the park a natural feel. 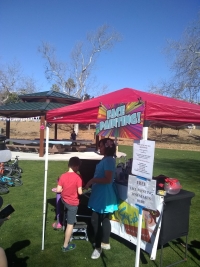 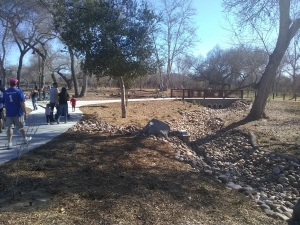 her dog to the park because of dog-preying coyotes and “undesirables,” most residents had only positive reviews.

“It’s better, a lot better,” said Aaron Shivey, who’s lived in Santee for 50 years. “I can remember when this was nothing but sand, and there was a baseball diamond down near the road….There was nowhere for the kids to play, and there was no snack bar.”