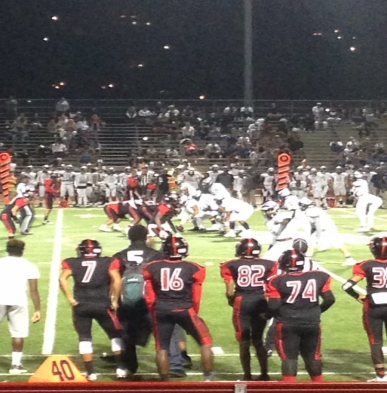 Almost immediately, Madison took the lead on an 81-yard rushing touchdown by Erick Buchanan and the score was 6-0 Warhawks after the extra point.  Madison scored again when quarterback Terrell Carter snuck it in and it was 13-0 Warhawks with 7:38 left in the first quarter.  The Warhawks weren't satisfied.  On 4th & 5, Carter aired it to Brandon Lewis who took it downfield for the score.  20-0 Madison after the PAT.

Midway through the second, the Warhawks decided they weren't done yet.  Buchanan caught the short touchdown pass and Madison led by a whopping 27-0 after the PAT.

With 2:12 left in the half, Kenan Christon added another Madison touchdown on a short pass and the Warhawks led 34-0 at the half.

At the buzzer in the third, Buchanan ran it in for his third touchdown of the night and Madison led 41-0 after three.  The Warhawks scored again on a long run by Christon and the Warhawks led 48-0. Absolutely nothing was working for the Matadors tonight and they would lose by that score.

Next week is homecoming for the Matadors as they take on the Monte Vista Monarchs at 7 p.m.