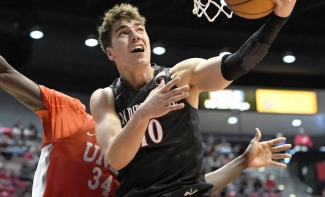 Forward is on pace to graduate this summer

“I want to thank Max for his contributions to Aztec Basketball over the last three seasons,” Dutcher said. “He was instrumental in us winning the Mountain West postseason title and winning nine consecutive games down the stretch. We wish him well in his future endeavors, both on and off the court.”

“I am grateful to Coach Dutcher, Coach Fisher and my teammates for a tremendous three seasons,” Montana said. “I have enjoyed my San Diego State experience and appreciate all of the Aztec fans that have made this such a great experience. I look forward to following the Aztecs closely as I pursue my professional basketball career overseas.”

This past season as a redshirt junior, Montana saw action in 26 of 33 games on a team that won the MW championship and earned a berth in the NCAA tournament. He reached the double-digit plateau in scoring eight times with a season-high 20 points coming against Colorado State inside Viejas Arena. In the game vs. the Rams, he made a career-high five treys, something he accomplished three times in 2017-18 and six times overall (all at SDSU).

For the season, Montana, who has dual citizenship in the United States and Germany, averaged 6.9 points and 3.0 rebounds, and made 41 three-pointers at a 36.3-percent clip, both of which were the second-highest marks on the team.

A native of Calabasas, Montana spent his true freshman season at Indiana where he helped the Hoosiers to the NCAA tournament, while averaging 2.4 points and 1.3 rebounds in 31 games. After the season, he returned west and transferred to San Diego State where he out 2015-16 due to NCAA transfer rules.

In his redshirt sophomore season (2016-17), Montana played in 29 of the Aztecs’ 33 games, starting 10 straight contests, including the final two at the Hawaiian Airlines Diamond Classic, which resulted in a tournament title, and the first eight games of Mountain West action.

Montana ultimately finished his first playing season at San Diego State by averaging a career-high 7.7 points and 3.8 rebounds, while knocking down the second-most three-pointers on the team (52). He scored in double figures 10 times, including a career-high 21-point effort vs. Boise State in the MW quarterfinals, and matched his personal best with nine rebounds vs. San José State.

In 55 games as an Aztec, he averaged 7.3 points and 3.4 rebounds in 17.9 minutes. Montana made 93 treys, which ranks 19th in school history, and made 35.4 percent of his attempts from behind the three-point arc to rank 18th on SDSU’s career list. His 77.1-percent free-throw accuracy, meanwhile, is the 16th best in program history (minimum 40 career free throws).