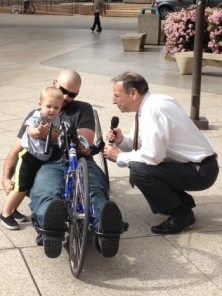 April 18, 2013 (San Diego) --  Mayor Bob Filner received a big thank you on Friday from a wounded Army veteran in desperate need of mobility. The Mayor secured a handcycle for Todd Fahn, who suffered severe injuries to his back from an explosion while serving in Iraq.

Fahn brought his son, Bentley, to meet the Mayor.  Fahn says his new handcycle will allow him the mobility he needs to get around quickly, especially as the father of a toddler.

“I had come to a place of extreme frustration and the system was not working.  I reached out to Mayor Bob Filner because of his many years of commitment to helping veterans in need and he delivered,” said Fahn.  “Because of him, I have a device that helps me get around quickly and efficiently.”

Mayor Filner met Fahn at a Wounded Warrior Project event in San Diego.  Fahn was teaching other wounded veterans how to use a handcycle, which is a bike that is powered by hands rather than legs. He told the Mayor about his situation and how he was unable to get funding from the Veterans Affairs Administration for a handcycle of his own.

“We must always remember the extreme sacrifice that the men and women in our military have made for us,”  said Mayor Filner.  “We must show compassion and gratitude by helping however we can.  It is the least we can do to make sure they have what they need.”