Do you qualify for compensation due to wrongful foreclosure in 2009 or 2010? Find out and get help--free

Under the IFR review, the 14 largest banks/servicers are required to pay homeowners who were improperly foreclosed upon up to $125,000 each in compensation. But since only 5% of homeowners have been properly contacted by the banks and none have received any relief, federal banking regulatory agencies have committed to holding this pre-Christmas event.

Mayor Bob Filner will open the conference and will be joined by key officials from the Office of the Comptroller of the Currency, the Federal Reserve and the California Housing Finance Agency. Immediately after the conference, the NAAC and Mayor Filner will be calling a meeting with the major banks in San Diego to discuss outcomes of the conference and establish next steps.

More than 20 nonprofits will be actively participating in the afternoon resource fair providing free services to families in attendance.

The genesis for this conference began when the NAAC and HomeFree-USA met with federal banking officials in DC, including Federal Reserve Governor Sarah Raskin, Comptroller of the Currency Tom Curry and Treasury Undersecretary Mary Miller in July of 2012 to discuss the failure of the IFR program. Partly as a result of this meeting, the Administration has twice extended the deadline (the final deadline is December 31st, 2012) and has ordered the banks to expend what could be over $500 million in outreach and advertising.

Mayor Bob Filner stated, “Homeowners in the City and County of San Diego have suffered too much during this economic crisis. I have urged one of our nation’s leading nonprofit home counseling organizations [NAAC] to assist us in attempting to effectively address the problem from a community perspective. The conference we are holding is long overdue. I intend to help lead an effort to not only resolve the plight of more than two million Californians facing foreclosure but to champion the opportunity for greater responsible future homeownership. The expansion of homeownership opportunities is, as Federal Reserve Chairman Bernanke recently stated, the key to our nation’s economic development and the reduction of California’s unemployment rate from 10% to 5% or less.”

Faith Bautista, President of the NAAC, stated, “The NAAC is very pleased that the federal banking regulators have finally committed to helping resolve the homeownership and foreclosure crisis. And, we appreciate the willingness of almost all of the major bank/servicers to work closely with the NAAC and our nonprofit partners, such as Operation Hope and HomeFree-USA, in resolving this crisis. But, far more must be done. All 4.3 million Americans, including one million in California, who are eligible for the IFR must and should be contacted about this program well before the President’s second inaugural speech.”

Bautista continued, “At the December 15th event, hundreds of homeowners have expressed a desire to sign a letter to President Obama urging that he visit San Diego and meet with the mayors and homeowners in distress throughout California.”

The National Asian American Coalition (NAAC) is a HUD-approved 501(c)(3) nonprofit organization with a focus on homeownership, small business assistance, diversity and consumer protection for underserved minority communities. For more information about the conference, visit http://morehelpforhomeowners.eventbrite.com/ or call (415) 449-1696. 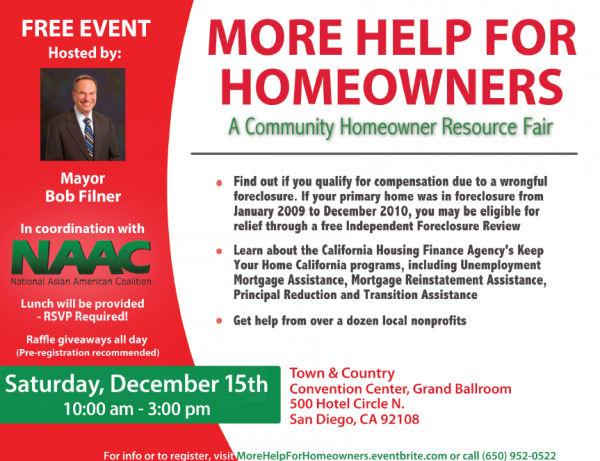