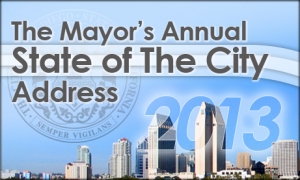 “We have an opportunity in San Diego to create a truly great international city; a city that respects and empowers its people; a city that protects and enhances their quality of life, and a city that promotes good-paying jobs and a healthy economy for all residents.” – Mayor Bob Filner

January 17, 2013 (San Diego)—In his State of the City address this week, newly elected Mayor Bob Filner  discussed financial challenges as well as his vision for the future. He likened the city to a “patient who has overcome a serious illness,” citing a past cover-up of financial problems.

“The budget surplus predicted by my predecessor last year could actually be a deficit as much as $40 million,” Filner said, noting that state funding issues and court cases remain to be resolved.   “But if we learned anything from the mistakes of the past, it’s that it is better to be truthful about these problems than to cover them up,” he said.  Despite challenges ahead, the Mayor laid out ambitious plans for revitalizing the region's economy, making San Diego the nation's solar capital, expanding redevelopment to neighborhoods city-wide, and improving communication systems for regional emergencies such as wildfires.

On a positive note, the city has received $34 million in one-time revenues from the County and SDG&E which Filner predicts will help cushion the blow of the deficit.  “It would be imprudent to spend these one-time revenues on recurring costs,” he added, then revealed that he intends to use a portion of those funds to upgrade the city’s antiquated public safety communications system for first-responders.

“In regional emergencies, like the wildfires of 2003 and 2007, the public expects government officials to work together to protect their safety,” the Mayor added.

Negotiations with city employee unions are underway; the Mayor aims to present proposed five-year agreements to Council in April.  He is asking for a five-year freeze on pensionable pay to all City workers to reduce underfunded pension obligations nearly $1 billion over 30 years and lower annual contributions. He believes the plan would be a “huge step forward in stabilizing City finances” but pledged to do so without “scape-goating our employees or using strong-arm tactics.”

Filner praised the success of downtown revitalization, but said the city has failed to invest similar resources or imagination in making older urban neighborhoods as safe, attractive and healthy as they can be.  He called it “unacceptable for a city that calls itself `America’s Finest City’ to tolerate neighborhoods without paved streets and street lights.”

He wants to rename Civic San Diego “Neighborhood San Diego” and expand the public-private model of redevelopment pioneered downtown to improve other neighborhoods.

He also calls for transportation improvements such as bike paths and pedestrian=friendly designs such as Bird Rock’s roundabouts.The Mayor said the city’s land use and development review functions will be reorganized into a Department of Healthy, Safe and Livable Neighborhoods.   A Neighborhood Infrastructure Financing Team is expected to present Council with proposals by fall, starting implementation next year.

Mayor Filner also called for San Diego to consider responses to climate change. “Rising sea levels demand that we plan now to protect vital coastal infrastructure and neighborhoods,” he said. “We’re not going to save our beaches by putting our heads in the sand.”

He repeated his campaign promises to create jobs by improving the Port of San Diego Infrastructure and said he expects to break ground soon on expansion of the Convention Center.   He announced he has leased office space in Tijuana to open February 1, focused on international investment in our region.

The third component of his economic and jobs growth plan is based on making San Diego the capital of an emerging “aqua” economy with opportunities in both green tech and “blue” maritime industries.  He also pledge to expand the market for solar with “the most ambitious solar initiative by any local government in the U.S….I will soon mandate that all municipal public buildings be equipped with solar power and urge all government agencies and businesses to do the same.”

He also called for creation of an urban forestry program to both beautify communities and moderate effects of rising temperatures in the region.  The city will work swiftly to complete a Climate Mitigation and Adaptation Plan, he added.  He also aims to ask SANDAG to reprioritize transit funds to fast-track alternative and public transportation options.

Filner revealed that the Chargers have advised him they will not terminate their stadium lease or seek to relocate this year.  “I will work to make sure that our Bolts don’t Bolt,” he said.

He pledged to make solving homelessness a priority, calling the plight of thousands of men, women and children who are homeless in San Diego “disturbing.” He noted that many are veterans, adding, “we have a moral obligation to do more to help people help themselves.”

Citing threats to San Diego’s water supply, the Mayor announced he is calling on the state to support local water supply development.

Working toward more open government, the mayor said he will meet with the public on the first Saturday of each month from 9:30 to noon starting February 2  He also pledged to build a “cultdure of participation in all of our neighborhoods.”

He ended on an upbeat assessment, noting that many cities in the U.S. are only now confronting realities of past fiscal shortfalls, while San Diego has directly confronted challenges of the recent past and “created a national model for overcoming them.”

He said San Diegans have an opportunity to create a “truly great international city” that will respect and empower people while enhancing quality of life with good-paying jobs and a healthy economy.  “Over the  next year,” the Mayor concluded, “I invite you to join me in working to make that city a reality.”