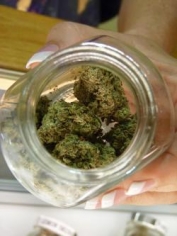 "As I made very clear during my campaign for Mayor, I support the use of marijuana for medicinal purposes and am committed to ensuring the people who legitimately need it for relief of pain are not kept from accessing it," Mayor Filner said. "I also want to assure the residents of San Diego that there will be the utmost safeguards surrounding these dispensaries.  They will not be near schools, playgrounds or any areas where children might gather.  Nor will they be allowed to infringe on the quality of life in any neighborhood."

He added, "I believe that, in order to be a great city, we must also be a humane city and show compassion toward those who need help in dealing with chronic pain."

That's welcome news to Rudy Reyes, worst-burned victim of the Cedar Fire and an advocate of medical marijuana who sued the County of San Diego over its refusal to issue medical marijuana cards. He won his case in federal appeals court.

"I've spoken with him many times on the campaign trail...He realizes this is an initiaitve passed by the people 16 years ago and that he has to support what the people said. This is a step in that direction, unlike the County which has gone completely the opposite direction."

Reyes and his attorney, Mark Blumel, who represents the San Diego Medical Marijuana Task Force, have had meetings with the Mayor on the issue, he said.

"It's a big step forward having acknowledge of rights. I personally was raided, and after they dropped charges I realized that people do have rights and started to speak out," Reyes said.

The U.S. Attorney's office has taken action to shut down clinics in some areas, including East County's only clinic in unincorporated El Cajon.  But Reyes predicts that the federal government is unlikely to conduct raids when not requested by the city attorney, based on recent precedent in San Francisco.

San Diego City Attorney Jan Goldsmith has stated that he will abide by the order and further, drop charges against several clinics that were pending.