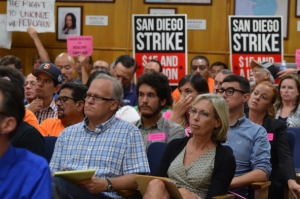 The Mayor issued the following Statement:

This ordinance unfairly pits working families and our city against economic realities that will make it even harder for San Diego to thrive. I cannot support putting the brakes on our economy. I believe we can and must work together in unison – workers, businesses and government – to move San Diego forward.

According to Raise Up San Diego, a coalition that was formed for this cause: “A new poll found that almost two-thirds of voters – 63% – support the Earned Sick Days and Minimum Wage Ordinance approved by the City Council last month. The poll was conducted July 31 – August 4, 2014 by Greenburg Quinlan Rosner Research.”

They also quote Biviana Lagunas who said: “I’m heart broken. The Earned Sick Days and Minimum Wage Ordinance meant families like mine would have the ability to keep up with the rent and put groceries on the table. The Mayor is taking away a chance to make ends meet from hundreds of thousands of families.”

That heartbreak likely won’t last long, however, since the City Council is expected to override the Mayor’s veto after Council returns from the August recess in a month.

The City of San Diego fought and retaliated against me for taking unpaid time off work to care for a sick child. "The FMLA entitles eligible employees of covered employers to take unpaid, job-protected leave for specified family and medical reasons with continuation of group health insurance coverage under the same terms and conditions as if the employee had not taken leave. Eligible employees are entitled to: to care for the employee’s spouse, child, or parent who has a serious health condition" It was a month of not paid time off. When I returned to work the conditions were hostile towards me, my supervisor told me the next level supervisor Mike was mad at me and I didn't say anything more out of fear of getting fired. The labor union was worthless.