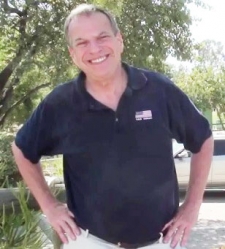 He outlined plans to create thousands of new, good-paying jobs for San Diego's region countywide through a revitalized maritime industry and through policies to make San Diego into the “alternative energy capital of the world.”  He also shared his ideas for improving public education and resolving the public employee pension issue as we “turn San Diego towards the 21st century.”

Rep. Filner's long public service career includes serving on the San Diego City Council and as Deputy Mayor before being elected to Congress in 1992, where he’s served nearly 20 years. He is also past president of the San Diego Unified School District, giving him an unusually diverse range of experiences for a Mayoral candidate.  View the complete interview on video and scroll down to read highlights.

Calling jobs the number one issue facing San Diegans and people across America, Rep. Filner said, ““We have never tapped the incredible potential that the port offers for a maritime industry.” Revitalizing the maritime industry would provide good-paying jobs for working people, he added. “Since we lost the defense industry in the 90s, we have never replaced that with middle-level jobs that are sustained and allow people to buy homes and send their kids to college…A maritime industry that would employee thousands of people would do that.”

He also expressed support to continue nurturing San Diego’s biotech industry and more broadly, “become the alternative energy capital of the world.” Specifically, Filner wants to “begin to mandate that the city buildings, for example, are solar-powered or the school system is solar-powered.”

Earlier in the event, San Diego Unified School Board member Kevin Beisner told the crowd that the school district is now the “number one producer of solar energy in America” and that $1 million in energy savings by going solar in one year along has enabled the District to hire back many laid-off teachers.

Filner wants to see such policies implemented broadly to spur green jobs countywide, including in East County. “The private sector will respond to the public sector’s demand for solar, and once you have a viable private sector, the price comes down,” making solar more affordable to homeowners and business owners, he added. “People like to say government can’t create jobs, but government can create the environment that can produce jobs.”

A former school board president and professor at San Diego State, Filner believes improving public education is an important goal—and has ideas on how he could take the lead as mayor to help make that happen.

“When I was on the school board I created an adopt-a-school program that allowed businesses, the Navy, sports teams” to adopt local schools, he recalled. “We could do that on a much wider basis now and really build cooperative relationships between schools and industry.” This could foster opportunities for both jobs and internships, he added. “The Mayor can do a lot about that…the Mayor can set the stage for a much higher level.” Filner, who helped start an after school program during his tenure on the school board, asked, “Why aren’t we doing more?”

He also called for the City to encourage after school programs by partnering with businesses, churches and sports teams. He summed up the need in a word: “Leadership. The question is will the mayor or chief executive talk about these issues?”

Filner discussed the pension issue and set out to dispel myths and misinformation. “Most people do not know that city employees do not have Social Security, so they would be left with nothing,” he said of the establishment’s 401k plan to replace pension benefits originally established under Republican Pete Wilson. He called that solution unfair. Instead, Filner would resolve the problem by calling for caps on management pensions and reducing unfunded liabilities through other reforms. “We do not need to solve this on the backs of hard—working employees,” he concluded.