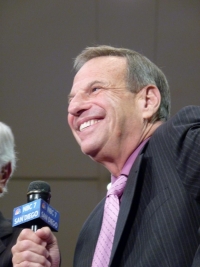 June 27, 2012 (San Diego)--“Open government is the cornerstone of ensuring the public trust. The public has a right to know how their taxpayer dollars are being spent and should be able to rely upon the information they receive from city government,” said mayoral candidate Bob Filner, who today released the first part of his Open Government Plan.

The first steps in Filner’s plan aim to help the public and media access public records. The plan also improves training of public officials in Brown Act and Public Records Act and adds stronger audits and oversight. Specifically, the plan would:

*Establishing an Open Government department that would be tasked with assisting the public, media and all mayoral departments with Brown Act and Public Records Act issues and requests.

*Ensuring there is follow-up on significant audit findings and recommendations from previous audits.

“If the public cannot access government information or suspects they are not being told the full story about how and why decisions are made, they lose faith in the system. I will implement open government measures immediately upon taking office,” said Filner, long-time member of Congress and former Councilman now running for Mayor.