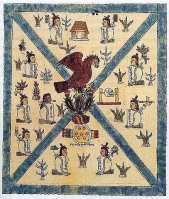 March 15, 2014 (Mojave Desert)--The Bureau of Land Management (BLM) has approved “the construction, operation and maintenance, and decommissioning of an up to 750-megawatt (MW) photovoltaic (PV) solar energy generation facility and related infrastructure called the McCoy Solar Energy Project.This project follows on the heels of the California Energy Commission’s approval of a similar project by NextEra Blythe Solar Energy.

NextEra has requested a modification of their original right of way to avoid destruction of the ancient Kokopilli geoglyph--but the Quetzalcoatl Human Quartz Image lies in the path of their new route. There are more than 50 sacred sites in the McCoy Valley, where the McCoy and Blythe solar projects are to going to be built, and it appears that three giant geoglyphs have already been destroyed.

The “True North Sun geoglyph” and a sacred solar image that was part of the Kokopilli/Cicimtil geoglyph group, were bulldozed in 2010, when Blythe’s original developers put in a 5 mile long transmission roadway.

More recently, a 10' by 10' eagle geoglyph in the middle of the proposed McCoy project has been reported “missing.”

This area is believed to be the cradle of the Nahuatl peoples, the most famous branch of which (the Azteca) migrated to the south and conquered most of Mexico.

According to Alfredo Figueroa, Founder of of La Cuna de Aztlan Sacred Sites Protection Circle, “This geoglyph eagle represents the eagle on the surface of earth and the large white limestone eagle (1/2 mile wide) that is on the Big Maria Mountains represents the cosmos as it lands on the peak of Granite Peak (Tamoanchan-where sky meets earth). This is the basis of the creation story as it is related by the Mexica codices and currently is represented in the Mexican flag. The creation story as it relates to this area is also told through the oral history of the tribes in the Colorado River Basin Valleys. “

“There is no way that any of these sites can be mitigated,” Figueroa said.  “the temple (geoglyph) and other sacred sites that are located on the east portion of the proposed (Blythe) project will be destroyed such as the four circles that represent the four past suns of the Aztec Sunstone calendar.”

The Colorado Indian Tribes (CRIT) that the projects be aborted because, “While the reservation is now is confined to an area astride the Colorado River north of Blythe - quite close to the proposed project area - the ancestors of the present day CRIT members previously lived across a much broader area of the region. As a result, sacred trails, burial sites, petroglyphs, and intaglios and archaeological resources are present through-out the landscape your agency seems intent to convert to an industrial zone.”

In 2012, the Congress of American Indians has passed a resolution stating, “... over 40 proposed solar and wind renewable energy projects are to be undertaken within a 50-mile radius of the Colorado River Indian Reservation, which puts tens of thousands of acres of land within the ancestral territory homelands of CRIT, as well as our other Yuman Tribes, at further risk of destruction.”

The Inter Tribal Council of Arizona passed a resolution against the fast tracking on these projects.

On February 21, 2014, The Committee on Chicano Rights sent a protest to the BLM.

“Enough is enough, our organization the Committee on Chicano Rights (CCR) hereby goes on record in opposing the NextEra Blythe Solar” Project. We are also in support of the positions taken by, La Cuna de Aztlan, Sacred Site Protection Circle, numerous Native American Tribes and organizations. AAll are on record as opposing the destruction of sacred cultural, and burial historical indigenous sites,” Herman Barca, President of the CCR, wrote the Commission. “The California Energy Commission’s approval of the NextEra Blythe Solar Project after Genesis attorney stated, “public interest in renewable energy was more important than preserving Native American Cultural Resources,” is a political slap and insult to California’s Chicano community (soon to be the majority population), and especially this country’s Native American Communities.

"It’s a fact, in the United States and Mexico that one of the most popular geoglyph recognized sites is the Kokopilli/Cicmitl Twin Group of the Creator. With the California Energy Commission’s approval of the NextEra Blythe Solar Project, the site is now being threatened with destruction by solar power companies.

“It appears that the California Energy Commission's decision to approve the NextEra Blythe Solar Project is another political and economic “sellout” to Solar Energy Corporations. Again as we stated above, “Profits should not be made at the expense of the destruction of sacred cultural, burial and historical indigenous sites.”

The BLM’s consultant did a pedestrian survey of the McCoy project area, after which they recommended that 96 of the archaeological finds they made within the project right of way be recorded in the National Register of Historic Places. Twenty of these finds were designated “prehistoric.”

In June 2010, two of the California Energy Commission’s (CEC) archaeologists reported that, as a result of planned industrial scale solar projects, “ … more than 800 sites within the I-10 Corridor, and 17,000 sites within the Southern California Desert Region, will potentially be destroyed. Mitigation can reduce the impact of this destruction, but not to a less-than-significant level.”

Their report also stated that, “ … indirect impacts, of a cultural or spiritual nature, can only be identified by members of the community who value the resources culturally and/or spiritually, in this case Native Americans. This is particularly important for the mitigation of impacts to ethnographic resources that rely on the formal Section 106 government-to-government consultation process with Native American groups as an information source for impact assessment and mitigation recommendations.”

Anyone wishing to comment on the proposed modification to the Blythe project must do so before Monday, March 24. They can by mail, fax or email their submission to: