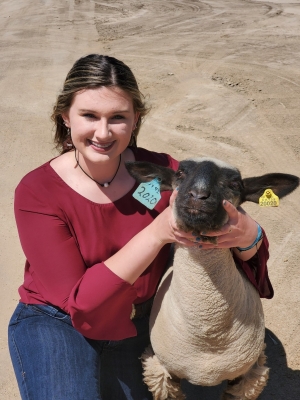 April 21, 2020 (Lakeside) – For East County kids who raise pigs, cattle, sheep or goats through the Future Farmers of America program, a highlight each year is the live auction of their animals at the San Diego County Junior Fair. But due to the fair’s cancellation  amid the COVID-19 quarantine, the Eastern San Diego County Junior Fair’s market animals auction will be held virtually on May 14.

Don Dyer of Alpine, president of the Eastern San Diego County Jr. Fair (ESDCJF) Lakeside division says the judging, typically done in person, will be switched to online video presentations of the animals.

“Virtualstockshow.com will facilitate the judging and then the sale of the animals,” Dyer told ECM. “The exhibitors will make a 90 second video showing their market animals which will be evaluated and placed by the fair’s judges. Exhibitors will sign up and submit their videos on Saturday, May 9th.  Judging will happen on Thursday, May 14th, and the auction will be held online on Saturday May16th starting at noon.”

Dyer noted that typically there are more categories in the competition, but this year will only involve the market animals up for sale to individuals or stores.

“The Lakeside community has always been supportive and buys them for their freezers,” said Dyer.

How do the youth see this turn of events? One participant gave her perspective.

“We have to see it (the covid-19 pandemic quarantine) as something that we overcame,” said Taryl Townsend a junior at Mt. Empire High School who lives in Boulevard.

Townsend will prepare a video of her two lambs, Decker and Billy, showing one in Lakeside and one in Del Mar.

“I bought them from Dry Creek Farms for roughly $400,” she said. “I expect to break even.”

Townsend has been diligently feeding and exercising her livestock.

“I walk my lambs two miles a day and put them on a stand with an incline for 10-15 minutes,” she said. “They are strictly on High Noon Feeds grain food.” The are washed and receive a blow-out before the presentation.

Here are the nuts and bolts of the auction: 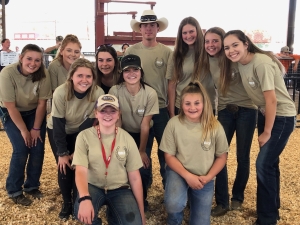 “Animals will be dispersed to the buyers on Monday, May 18th. Other fairs are doing similar things. Market animals will still be evaluated based on market readiness, just through a video format,” Dyer continued. “Exhibitors will receive the usual fair prizes; every exhibitor will receive a blue ribbon for animals that are market ready.  Belt buckles and banners for champions and reserve champions of each species (beef, hogs, sheep and goats). Exhibitors will receive their auction proceeds from the fair. Exhibitors range in age from 9 to18 and are members of local 4-H clubs and FFA chapters.”

(Photo at right of last year's fair board courtesy of Don Dyer.)

Dyer explained the work involved and the prizes. 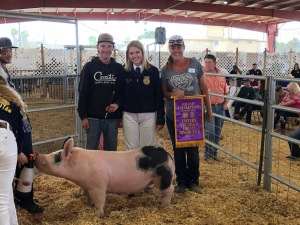 This fair is a non-profit organization supported 100% through volunteer fundraising.

• Have the meat cut to your preference. Put quality meat in your freezer.

• Form a cooperative and divide the processed meat with a friend.

• Buy a quality animal and resell it at market price to the commercial packer at the auction by checking the “sell to packer” option on the sales slip and absorbing the cost difference as a contribution to the FFA and 4 -H programs.

• Auction off packaged meat to members. Boost your treasury. • Schedule a gift to a charity.

• Put on a club barbeque.

Present packaged meat to your customers or as a promotion.

• Put on a barbeque for employees.