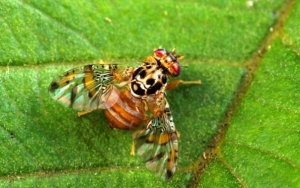 August 18, 2015 (La Mesa)-- State, federal and County of San Diego officials have announced that 93 square miles covering portions of San Diego City and East County communities have been put under quarantine after the discovery of four Mediterranean fruit flies — a dangerous pest that can infest more than 250 crops.

Backyard gardeners are being encouraged not to move fruit they grow off their properties, but to eat it at home instead, while commercial growers, nurseries, wholesalers and retailers will have to comply with quarantine requirements.

Agencies have already started dropping millions of sterile fruit flies — which have been used successfully to eradicate past infestations — and to treat properties within 650 feet of where the flies were found with a naturally-occurring bacteria that is poisonous to Mediterranean fruit flies.

A neighbor of a home where a fruit fly was found has advised East County Magazine that treatments would be on the ground, not aerial spraying.

The 93-square-mile quarantine area is bordered on the north by Prospect Avenue; on the south by Mount Miguel Road; on the west by Fairmount Avenue; and on the east by Vista Grande Road.  Map of quarantine area (PDF)

“This invasive fruit fly is considered to be the most harmful agricultural pest in the world,” said County Agriculture Commissioner Ha Dang. “Effective eradication measures help to safeguard the local food supply, fruit export and the environment.”

For more information, call the California Department of Food and Agriculture’s Pest Hotline at (800) 491-1899.