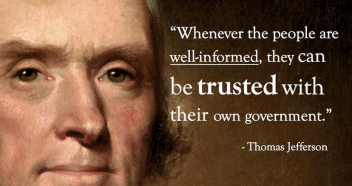 June 1, 2013 (San Diego) –Access to information from truthful, unbiased media are cornerstones to democracy.  As KNSJ prepares to launch its public, nonprofit radio station transmitting from Descanso in East County, you’re invited to a forum on media justice hosted by Activist San Diego.

East County Magazine editor Miriam Raftery will be among the panelists at the forum on Monday, June 17 at 7 p.m.  at the Joyce Beers Community Center on Vermont Street (one block north of University Avenue across from Trader Joe's).

Joseph Pulitzer  observed  back in 1883 that the media “should always fight for progress and reform, never tolerate injustice or corruption, always fight demagogues of all parties, never belong to any party, always oppose privilege classes and public plunderers, never lack sympathy with the poor, always remain devoted to the public welfare, never be satisfied with merely printing news, always be drastically independent, never be afraid to attack wrong, whether by predatory plutocracy or predatory poverty.”

But today, the major broadcast media and many print publications are owned by the very same corporations over which media should serve as watchdogs--and they have are far from impartial . Six corporations control the vast majority of our airways and more.  Consider this:

Democracy Now host, journalist Amy Goodman, once observed that “the media can be the greatest source for peace.”  But how apt is that to happen when the major media is owned by corporations that profit off of war?  Similar conflicts of interest apply to issues across the board: can we count on a company with vested interests in energy companies to tell us the truth about energy issues or climate change?  And when companies seek to influence the outcome of elections with hefty donations to candidates in any political party, are the media outlets that they own rgoing to provide us with unbiased campaign coverage?

In addition to the media justice forum, the ASD meeting will also include a discussion of the KNSJ radio launch, as well as election of officers for the nonprofit organization, an umbrella group that includes a broad coalition of causes.