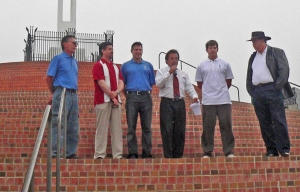 July 4, 2009 (San Diego)—Alpine resident and East County radio personality Stacy Taylor will be returning to the airways soon on Liberty One Radio, organizers announced at a July 4 press conference. “As our forefathers did in creating this great nation, we are here to announce the creation of Liberty One Radio, where your voice and the voice of freedom can again be heard,” Hector Bonilla, chief financial officer said. The station will feature locally-produced newscasts, national and local talk show hosts including East County radio personality Stacy Taylor.

“We are in negotiations with several stations to get a frequency strong enough to be heard county-wide,” Liberty One Radio’s general manager Sal Magallanez told East County Magazine. “We may even have to build our own tower.”

Liberty One Radio will start by airing podcasts on its website (www.libertyonemedia.com) in September and aspires to be live on air January 1st—in time to impact the June 2010 primary elections.

A second new station, with call letters yet to be determined, has been approved by the Federal Communications Commission (FCC) to begin broadcasting out of Descanso. That license was awarded to Activist San Diego on May 1. The group has three years to raise funds and complete construction of a station. Programming will likely include a mix of community radio programs including music and arts programming as well as political and non-political talk. Although Activist San Diego is known for supporting progressive causes, the radio programming will likely include a variety of viewpoints, spokesman Martin Eder said. He hopes to begin Internet broadcasting within several months and has estimated the station could be on air as early as next summer.

“What makes Liberty One different…is that people can actually create content and get their voices on the air,” said Mike Russell, director of marketing. Content created by members of the public will be posted first on the website and listeners will have an opportunity to help decide what segments should go on the air.

Organizers are embarking on a fundraising drive to bring progressive voices back to the public airwaves for the long-term. Those interested in supporting the station can choose from several membership levels. Liberty One also seeks major investors and advertisers. In addition, volunteers who donate time can receive credit through www.service.gov. Liberty One representatives are also available to speak to organizations anywhere in the County.

Stacy Taylor will host an afternoon drive-time show from 3 to 6 p.m. A morning drive-time program will be hosted by Mike Copass, former Democratic Congressional candidate and president of Progressive Democrats of America’s San Diego chapter.

Taylor and other progressive voices in San Diego County were silenced over the airways when KLSD, the region’s only progressive talk station, was converted to a sports talk format by Clear Channel. Unlike KLSD, Liberty One Radio will be locally owned and organizers are determined to secure a stronger broadcasting signal to assure a broad reach and financial success.

Copass shared his programming ideas with East County Magazine. “When I listen to radio, I feel over-informed about San Diego City Hall and under-informed about other communities,” he said, adding that he wants to include political coverage of East County, North County and the South Bay as well as San Diego. He plans to host “Fridays with Filner” to include the Congressman’s perspectives on federal issues. He also plans a “community corps” to keep listeners informed about local issues and events.

Liberty One Radio will have some national radio personality’s shows, potentially including Ed Schultz and Mike Malloy. Whether other former KLSD voices, or some non-political programming uch as music, medical, or gardening shows may be added remains undetermined. (One ex-KLSD radio host, Jon Elliott, is now back on the air from 3 to 6 p.m. on AM 1700.)

In addition to the return of progressive talk radio formats to the San Diego market, one popular local conservative talk radio host has also recently returned to the airways. Mark Larson’s show can now be heard on AM 1170, KCBQ, from 7 to 9 a.m.

The return of local talk radio programming of any ilk increases the likelihood that local hosts are on hand to broadcast in the event of an emergency. In one notorious incident in the Midwest, after a train collision released toxic fumes, deaths occurred because all radio programming originated out of state and nobody could be reached at local stations after normal business hours to air urgent public safety information.

Liberty One Radio’s Russell disclosed, “We’re actually having a news department. We will not be using AP or CNN. We will have a half hour evening news show that will be San Diego based and will have a progressive bent.”

The locally-produced station offers one advantage even for conservative listeners, organizers assured. In the event of a wildfire or other regional crisis, Liberty One Radio will be able to air information in a timely manner—unlike stations that rely solely on nationally-produced programming.