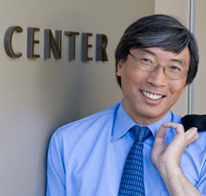 A surgeon listed in February 2018 by Bloomberg News with a net worth of over $8.5 billion, Dr. soon-Shiong made his fortune buying and selling pharmaceutical drug companies. He’s been called the “richest doctor in the history of the world” by Forbes.

He’s been credited with dramatically improving survival rates of cancer patients through innovations including genetic sequencing.  He’s been hailed as a wizard by some and criticized as a showman worthy of P.T. Barnum by others, according to a 2014 Forbes article titled “Can Patrick Soon-Shiong, the world’s richest doctor, fix healthcare?”

Dr. Soon-Shiong met with Donald Trump amid speculation that he might be tapped by Trump to help overhaul the nation’s healthcare system.  But in recent years, his political donations have leaned Democratic, including $50,000 to Hillary Clinton’s 2016 presidential campaign. He once interviewed former President Bill Clinton on global and U.S. healthcare issues, which you can view here:  https://vimeo.com/90179034.

“My quest was and is to improve the quality of life through science," he has stated. "That is what drove me then, and that is what is driving me now."

Born in South Africa to Chinese immigrant parents, Soon-Shiong also owns a minority stake in the Los Angeles Lakers.  He graduated from high school at age 16 and from medical school at age 22. At UCLA medical center, he gained fame for transplanting insulin cells into a diabetic.  He is credited with inventing the anti-cancer drug Abraxane.

His family foundation has donated millions to the UCLA Global Health Institute, according to UCLA.  However he has also drawn criticisms for grant funds that flowed mainly to his own companies, Politico reported.

He founded NantHealth, NantOmics and Nantworks LLC, which he currently chairs. He also serves as Executive Director of the Wireless Health Institute at the University of California at Los Angeles, and an Adjunct Professor of Surgery at UCLA. He has claimed that NantHealth’s supercomputer-based system and network are able to analyze the genetic data from a tumor sample in 47 seconds and transfer the data in 18 seconds.

In 2016, he launched the National Immunotherapy Coalition to encourage rival pharmaceutical companies to work together to test combinations of cancer-fighting drugs.  He has also met with former Vice President Joe Biden to discuss more ambitious approaches to fighting cancer, including conducting genomic sequencing of 100,000 patients to create a massive database of potential genetic factors., the New York Times reported.

“I’ve never been more hopeful in my life about our chance of changing the course of this disease,” Dr. Soon-Shiong said at the time.

If successful in acquiring the two major southern California newspapers, Soon-Shiong will join a growing crowd of high-tech entrepreneurs entering the media field, most notably including Amazon.com founder Jeff Bezos, who recently acquired the Washington Post.

The San Diego chapter of the Society of Professional Journalists  issued a statement indicating is watching the news of the sale of San Diego’s and Los Angeles' local papers with great interest, adding, "Both our industry and the ownership of The San Diego Union-Tribune have changed rapidly and repeatedly these past several years. But the principles of ethical journalism and the importance of a strong local press remain clear. San Diego SPJ encourages new owner Patrick Soon-Shiong to prioritize local reporting in both San Diego and Los Angeles, and to respect the voices of staff at both award-winning newspapers. We hope he will champion a strong local presence and stellar reporting in both communities."