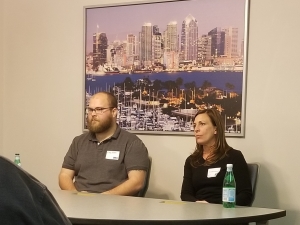 March 12, 2018 (San Diego) -- Millions of readers who rely on Snopes.com to fact-check news articles, urban legends, conspiracy theories and more in today’s era of “fake news” may not be aware of the organization’s San Diego roots.  At a San Diego Press Club workshop titled “Nuts and Bolts”, Snopes’ managing editor Brooke Binkowski and vice president of operations Vinny Green shared insights into the fact-checking end of the news business.

The workshop was held February 27th at the San Diego Press Club’s downtown office. A number of East County publications and professionals are SDPC members.

Snopes.com is a website that bills itself as the definitive internet reference source for urban legends, myths, rumors, folklore and misinformation. Snopes’ readers are familiar with the format that includes a false or true verdict on a story’s content,  with the reasoning for the verdict posted after the determination. Snopes has debunked political misinformation and purposeful disinformation from the left, right, and other political parties--- and death threats have ensured as a result of discrediting an idea that is placed in the news solely to confuse and divide readers.

To some, Snopes is the go-to site for checking a story posted on social media when the story seems too outlandish or the news source is suspect. The scroll on Facebook’s news feeds  has changed with the availability of quick fact checking, as users frequently correct inaccurate posts by linking to fact check stories on Snopes.

How did this workshop come about?

“Several months ago, we contacted Snopes to do a Nuts & Bolts,” said SDPC executive director, Terry Williams. Nuts & Bolts are workshops provided free to members, and for a nominal fee, to non-members. The workshops cover a variety of topics for professional growth and enrichment.  Williams added, “In 10 to 12 years we have had an estimated 60 workshops. This workshop is sold out.”

Green pointed out, “Snopes predated Google as a destination to look things up,” He added, “David Mikkelson had a hobby of checking on urban legends.  After 9/11 he started to address the conspiracy theories.” Snopes started out in 1994-95 and was founded by David and Barbara Mikkelson.

“One-third of our 17 staff are in San Diego.  Mikkelson is in Washington state,” said Green. Snopes also has contributing writers in a number of cities.

“We get a lot of death threats,” noted managing editor, Binkowski.  Staff vets the threats for credibility.

Binkowski also noted journalists can become discouraged with all the “fake news” labels and backlash. “We need journalists,” the Snopes editor said.

“We are very familiar with the disinformation community,” she added. So much so, that Snopes’ staff has also appeared  before government committees  based on what they have discovered doing their work. Urban legends, soft news and hard news are all vetted.

How much are they a part of the American cultural scene? “We were the subject of two questions on Jeopardy,” she continued, “even a daily double.” They also have an international presence.

Binkowski is an award-winning journalist and researcher who has contributed to CBS, NPR, CNN, Christian Science Monitor and more.

Members of Snopes’ staff have specialties such as immigration.  One writer has a degree in early Islam. They maintain an active Facebook page with over 618,000 likes.

Binkowski cautioned the attendees about getting hacked and/or  phishing, noting that purposeful “typos” can be a tip-off to a fake link.

“It’s amazing the amount of traffic they get,” noted Joe Vecchio, co-host, announcer and producer on 760 AM - KFMB.

You can visit Snopes to check out news stories, urban legends and more at www.snopes.com.

Some people still won't accept the truth though, no matter what the source. Another good website is https://factcheck.org