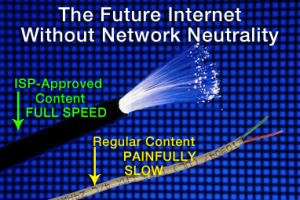 “No one, whether government or corporate, should control free open access to the Internet,” said FCC Chairman Tom Wheeler, who called the occasion a “red letter day.”

The new policy allows the FCC to regulate internet carriers like public utilities under Title II of the Telecommunications Act.  The rules will apply to mobile devices too, barring internet service providers from slowing down or blocking content while allowing preferred paid content to be accessed at faster speeds.

The dissenting votes came from two Republican FCC members who claimed the agency was interfering with commerce.

The action was opposed by Broadband for America, which represents large Internet service provides.  The group’s co-chairs, John Sununu and Harold Ford, called the FCC action “one giant step backwards for America’s broadband and everyone who depends on them” and claimed it will discourage private investment in new networks and slow innovation.

But the American Civil Liberties Union (ACLU) hailed the action.  ACLU Legislative council Gabe Rottman praised the FCC majority for delivering “a victory for free speech, plain and simple” by assuring that the Internet will remain open to all voices and viewpoints, allowing citizens to view what they wish to see online without interference.

The battle is not yet over, however, since major broadband corporations could file challenges to the decision in court.

...the same Government that is running the do not call list?