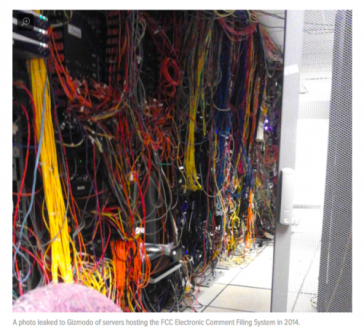 Bombshell story from Gizmodo underscores need for FCC to address serious issues with its public comment process before making any decision on net neutrality. 15,000+ people call on lawmakers to demand that FCC comply with transparency laws

Source:  Fight for the Future

August 7, 2017 (Washington D.C.) --In a bombshell story from Gizmodo today, a former FCC security employee lays waste to the agency’s claims that a pair of DDoS attacks took down the FCC comment website at the exact moments when large amounts of pro net neutrality comments would have been flooding into the docket following viral segments from comedian John Oliver in 2014 and 2017. The agency’s inability to maintain a functional way for the public to comment on its net neutrality proceedings has become an issue of concern for members of Congress overseeing the agency, and raises questions about how it can or should move forward with its rulemaking process.

The security expert who spoke to Gizmodo reveals that the FCC security team concluded that there had not been a malicious attack after the John Oliver segment in 2014. But recent FCC CIO David Bray told reporters that anyway, despite the fact there was no evidence of it, and he did not even have access to the types of logs and information that could have led him to that conclusion. The source also leaked a photo of the FCC’s server room to Gizmodo, revealing a mess of wires that would make any competent IT professional cringe.

When pressed, Bray admitted to being the source of news reports about the made up “hacking” attack, but he never reported the incident to the Department of Homeland Security, who require that government agencies notify them of such attacks. With the backing of the FCC press office, Bray fed reporters that exact same story when the agency’s comment system collapsed again this year, preventing large numbers of people from making their voices heard in the agency’s proceeding.

Evan Greer, campaign director of Fight for the Future, said: “These latest revelations are outrageous. A senior FCC official intentionally misled the public and invented cyber attacks to cover up the fact that the agency is failing at their responsibility to maintain a functioning system to receive feedback about an issue that affects every single person using the Internet. The FCC must address these serious issues with their comment process before moving forward, or it will be clear that this is a rogue agency that answers only to large telecom companies, and not to the American people.”

The news comes after more than 15,000 people have signed a petition calling on their lawmakers to instruct the FCC to comply with transparency laws as the agency moves ahead with its unpopular plan to gut net neutrality protections that prevent ISPs from charging extra fees, throttling, or blocking content online.

The agency is currently facing multiple lawsuits for refusing to release information related to the now-debunked DDoS claims, Chairman Ajit Pai’s discussions with telecom companies, and large amounts of fake comments using real people’s names and addresses without their permission.

“Members of Congress need to understand that this is not an issue they can ignore or hide from,” Greer added, “Voters from across the political spectrum overwhelmingly support the current net neutrality rules, and want their Senators and Representatives to do their job and speak out to ensure that the FCC is listening to the will of the public, not just to lobbyists from giant telecom companies. Lawmakers from both sides of the aisle need to exercise their oversight and demand that the FCC act transparently during this proceeding.”

Fight for the Future has been working to inform the public about the serious issues surrounding the FCC’s comment process. The group organized a letter from dozens of people whose names and addresses were used to submit anti net neutrality comments without their permission, as well as several petitions garnering tens of thousands of signatures calling on the agency to come clean about the alleged DDoS attack that prevented concerned citizens from submitting comments.

Fight for the Future was also one of the leading organizations behind the historic Internet-Wide Day of Action for Net Neutrality on July 12, which drove a record breaking 2 million+ comments to the FCC and Congress in a single day. Learn more at fightforthefuture.org.