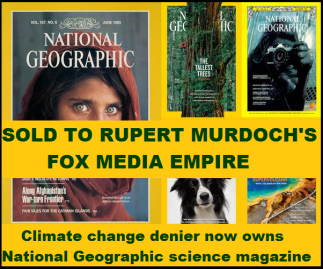 September 12, 2015 (Washington D.C.) – First published in 1888, the National Geographic magazine has long been one of the world’s most popular and respected journals chronicling science and culture around the globe.   But its reputation is now at stake at news that the nonprofit magazine is turning for-profit—and just sold to Rupert Murdoch’s 21st Century Fox.

The National Geographic Society was founded by scientific-minded leaders including Alexander Graham Bell, inventor of the telephone.  Early editions focused on scientific expeditions; the first issue promised to help spread news of research “so that we may all know more of the world upon which we live.”

But news of the publication’s sale to Murdoch, an infamous climate change denier,  set loose a flurry of posts on social media  and news outlets denouncing the action. Many said they will cancel their decades long subscriptions.

Washington Post reader Chumbo wrote, “This is sad news, sad indeed. Next thing you know the magazine will have drawings of humans riding on dinosaurs.”

Andrew Almack posted on Twitter, “#National Geographic how could you! You are dead to me. Sold to #climate denier Rupert Murdoch and his media empire.”

Occupy Democrats posted, “It’s like the FOX buying the henhouse. They sold their souls for $725 million. #nationalgeographic.

Killakeston predicted, “so now we are gonna have  bunch of garbage documentaries about climate change not being real.”

But others applauded the sale.  DiogenesXXX wrote on the Washington Post site, “Climate hysterics are desperately fearful of contrary evidence and opinion. Hence their alarm.”

Through the years, the National Geographic Magazine has covered topics that include climate change, evolution and anthropological discoveries, deforestation, endangered species, industrial pollution, and environmental protection—while Fox has taken a pro-industrial, anti-environmental and anti-science stance on such issues. In 2013, the Union of Concerned Scientists found that FOX aired "misleading" information on climate science 72% of the time.

Murdoch has made numerous climate change denial statements including these:  Climate change has been going on as long as the planet is here ... Things are happening. How much of it are we doing, with emissions and so on? As far as Australia goes? Nothing in the overall picture. China perhaps," and "World growing greener with increased carbon. Thirty years of satellite evidence. Forests growing faster and thicker."

But a Washington Post investigation found that financial peril is not apparent in the organization’s financial disclosures obtained through public records.   In fact its revenues grew 16 percent in 2013, the last year for which records are available, with $500 million in total revenues and a $25.7 million surplus. Net assets also grew 20 percent, giving the society a net worth of almost $900 million – that’s just shy of a billion dollars.

Moreover the organization’s officers were highly paid as well; Knell’s predecessor, John Fahey, raked in over $5 million as chief executive in 2013, up dramatically from $1.58 million in 2012.  Charity Navigator reports that’s among the highest salaries for a nonprofit in the nation.

The National Geographic Society itself will remain nonprofit, dedicated to exploring and mapping the world.  But will it still have a publication in which to share those scientific findings, without bias or censorship?

Is there a working link?

Anyone that's seen an issue lately will have noticed it is now crammed with advertising on every other page. A completely different experience! Wait till the Corporations get hold of our National Park system which they are already actively lobbying to do.
Really?

Britain's "The Guardian" newspaper has a detailed piece on this, showing how dangerous it is to have major media controlled by someone who ignores science:

the far left guardian .. wow next you will quote the huffington post of the daily kos ............ the only people ignoring science are the racists and abusers pushing global warming or climate change or the name of the day.