No matter what your party or political preference, this sort of blatant media manipulation should disturb you. Equally disturbing to advocates of a free press, many pro-Sanders comments or those questioning the network’s impartiality were repeatedly removed off CNN’s website stories on the debate.  How come?

The fact that CNN’s owner, Time-Warner, is one of Clinton’s largest campaign donors appears to have influenced the news organization to skew its coverage to favor  its corporate parent’s preferred candidate.  Other media that has given large sums to Clinton's campaign or to the Clinton Foundation similarly ignored polls and declared her the winner.

Right after the debate, a CNN poll found 81% of viewers thought Sanders won.  A CNN-Facebook poll, no longer findable on the CNN website, at one point had Sanders on top with 75% of the vote, Clinton with 18%,  O’Malley and Webb with 3% and Chafee with 1%.  See screenshot.

The CNN-Facebook poll wasn’t an anomaly.  We googled “CNN Democratic Debate Poll” and checked every one that we could find.  Polls by both liberal and conservative media all had Sanders winning the debate easily, though polls varied in the amounts.  Most polls put Clinton second, though some at sites with many conservative readers had Webb, a pro-gun, pro-coal and nuclear Democrat, ahead of Clinton.

Granted, online polls are not scientific and exclude people who don't have internet access, thought that's a shrinking number of voters.  But the sheer volume of polls as well as a look at who voters were looking up on Google after the debate are compelling--and seemingly unanimous in their outcomes as far as the winner. Some polls remain open. As of this morning , here are the results:

We could not find a single poll that put Clinton in the lead, nor any of the other contenders.

Yet the major corporate-owned media blithely fawned over Clinton’s “victory.”   Here are a few more examples:

ABC news: “Frontrunner Hillary Clinton reasserted herself as the dominant force in the race. Meanwhile, Bernie Sanders played to his base, but likely didn’t do much to expand it.”

Forbes graded the debate with letters, giving Clinton  an “A-“ and putting her at the top of the class. The National Journal claimed Clinton was the better debater, but was far from glowing, also calling her “dishonest.” The New York Times called Clinton’s showing at the debate the “best moment of her campaign.” 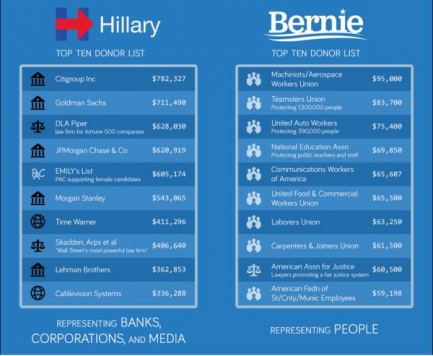 According to the Pulitzer Prize-winning fact-check site Politifact, (image, right) Time-Warner, which owns CNN, is the 7th largest donor to Clinton's campaign. Her top donors also include primarily banks and corporations -- the very institutions Sanders has railed against and seeks to regulate. Tellingly, two of her opponents, O'Malley and Sanders, criticized Clinton in the debate her opposition to breaking up big banks -- footage not shown on the major networks. (Sanders' major donors are predominantly in labor, education, and civil justice.)

Besides direct donations by some media outlets to the Clinton campaign, Politico in May reported on media donations to the Clinton Foundation.  Those include NBC, Viacom (owner of CBS),  the CEO of Fox News,  a top ABC anchor, the New York Times, the Washington Post, Reuters news service,  an anchor for PBS, and many more amounting to millions of dollars in media money.

The media also skewed coverage in which clips it did and did not include.  Most networks aired footage of Sanders saying he’s sick of hearing about Clinton’s “damn emails.” But how many saw him talk about wanting to support small and medium-sized businesses?  Or heard him discuss specifically how he would fund his ambitious plans to provide free college, free healthcare, and expand Social Security by raising taxes on corporations and the wealthiest Americans?

Could the fact that some of those big corporations own media outlets  account for such bias?  Interestingly, the only candidate to raise the issue of media bias was Sanders. Perhaps the media moguls want to make sure no light is shined on that troubling issue.

So who really won the debate?

Decide for yourself. You can view video of the full debate here or read the full transcript here.

Once upon a time there was essentially a firewall between the news desks and entertainment in the various broadcast stations. Walter Cronkite was allowed to tell the news as it really was because back then, media was not as controlled by so few corporations and frankly, news was not considered very important to the bottom line. News desks clearly need more regulation and separation from the corporations that are funding them. Just as the banks are going to act in their own best interest and not in the interest of millions of middle class consumers who took out mortgages and other financial instruments, corporations are going to use media to spin their own biased accounts. Such as Hillary won the first debate. This sort of blatant distortion of the media is exactly why fed up supporters are going to get Bernie elected in spite of Hillary's huge financial backers as well as the leaders of the Democratic Party.
"Clinton, riding momentum from debate, wins union backing"--Washington Post--LAS VEGAS -- A resurgent Democratic presidential candidate Hillary Rodham Clinton rode the momentum Wednesday from her strong performance in the first Democratic debate with her first large rally in months . . Earlier Wednesday, Clinton picked up the endorsement of the International Union of Painters and Allied Trades.....Asked whether her performance -- which was generally praised by analysts as the best among the five candidates on stage on Tuesday -- had closed the door on Vice President Biden's candidacy, Clinton demurred.

Worth noting, the Clinton campaign promised big ad revenues to the major media, so they have a second vested interest on bolstering her candidacy. These results are indisputable. Per emedia:

2. Fusion Focus Group: “Vermont Sen. Bernie Sanders was the most popular candidate among a group of young registered Democrats responding to Tuesday’s Democratic presidential debate in Las Vegas. The panel voted 8 to 3 for Sanders against the runner-up Hillary Clinton, with one panellist saying it was a tie between the two.”

like the other networks it's a financially-based entertainment network. The foreign "news" it covers, if any, is a parroting of the government positions. Ninety percent of the US stations are owned by six corporations, who provide us with the what the government wants us to hear, sent out daily from the State Dept . So everybody thinks the same, because that's what they are told. Domestically, you covered it. Who pays the bills. This year the presidential commission doesn't run the "debates." Cut them out. It's been Fox and CNN. Go right to the financial base. The establishment looks out for itself in this "democracy." Every eight years we get to vote for one of these schmucks, and then it's sit down and shut up. So, really, this stuff doesn't matter. We don't matter. They will do what they will do, conspiring with a bought-and-paid-for congress to get rich with money they steal from us. It's hopeless.

Debates should not be run by media corporations that have financial interests in the outcome. This is the problem with corporate-owned media and the selling out of the news business.

Wow, just think, the leading media isn't reporting the facts... who would have guessed? (Insert Sarcasm) Nothing like fair and balanced coverage!!! No wonder there is so much corruption in this country... It's not about the people any longer, its about self serving, how much can I get attitude! Money and Greed is our downfall. For a good example, just look at the energy sector! What industry by far consumes most of our fossil fuels? Transportation of course! But, the average person thinks that power generating facilities consume most of our fossil fuels. The wind and solar industry is a prime example of propaganda and greed. Thousands upon thousands of acres are going to be destroyed in the name of reducing greenhouse gases by constructing wind and solar facilities while automobiles and jet airplanes contribute 95% of the green house gases. This ignorance is like using a squirt gun on a wild fire. People need to wake up!