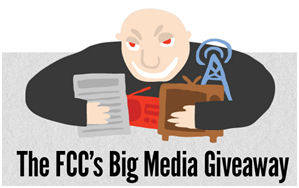 December 17, 2012 (San Diego)--As we celebrate the holidays and ring out 2012, it’s also time to pay attention what is happening right now with ownership of the mass media. Sad to say, the mood is more Scrooge-like than reflecting the spirit of Santa or Jesus. The Federal Communications Commission (FCC) is about to deregulate the media--and San Diego’s very own media mogul, U-T owner/developer Doug Manchester, may buy-up even more media outlets.

Manchester has used San Diego’s largest newspaper to shill for developments that will personally profit himself and his waterfront hotel.  He also wrapped the front page in editorials for candidates he’s personally given money to support—drawing criticism from Media Matters as well as Editor and Publisher for crossing the line that’s supposed to separate a newspaper’s editorial department from its news division. Manchester also failed to inform the public about a developer-backed scheme to eliminate community planning groups and has run editorials on energy projects favored by corporations without any mention of the negative impacts of those projects.  Is this really the kind of “news” coverage that we want in a democracy?

Meanwhile, more progressive radio stations than ever are going down the tube. When big business owns media, especially radio, it tends to reflect the corporate point of view and gives short shrift to the views of less powerful interests and management’s foe – the labor movement.  Plus when big business buys up local radio stations, layoffs inevitably ensue. The largest owner of radio stations, Clear Channel Communications, just announced its yearly Christmas-time round of layoffs. Clearly, it plans to get rid of local radio together and replace it with homogenized content from civics to music.

The Federal Communications Commission (FCC) is supposed to ensure local, diverse, competitive content on our publicly owned airwaves, but the Commission is falling down on the job.

Research shows that over 90% of news/talk radio is conservative, while less than 10% is progressive. In many places, there is zero progressive talk. This is true in San Diego following Clear Channel's killing-off of KLSD-AM. It's true now in Portland, Oregon, where Clear Channel got rid of KPOJ last month, on the five year anniversary of KLSD's demise.  This sort of distortion and one-sided coverage of politics and events is dangerous for  a democracy.  That’s not just true for Democrats; Republican primary outcomes and nonpartisan races can also be skewed by extremist ultra-right propaganda disseminated over the public airways.

As described in the Save KLSD documentary film released this year (co-produced by Jon Monday and me, both residents of San Diego County), the FCC under Republican President George W. Bush tried to loosen media ownership rules in 2003 and 2007. Ironically, now Obama's FCC is doing the same thing.

Let's hold president Obama accountable to his anti-media consolidation stance that he held strongly as candidate Obama. Sign the petition to oppose the FCC vote to loosen media regulation: http://act.freepress.net/sign/murdoch_powergrab/?source=website_front .

Otherwise, media tycoons who already wield too much power, e.g. Fox/News Corporation chief Rupert Murdoch and our own Doug “Papa Doug” Manchester (owner of the  UT newspaper and North County Times) will be able to own the L.A. Times, as both are pursuing, and also radio and TV stations in the same market.

It is not far-fetched to say that union-buster Governor Scott Walker of Wisconsin* won his recall election and Michigan's Governor Rick Snyder just this month signed anti-union legislation partly because there is an overwhelmingly amount of anti-union talk radio in those states and next to no progressive talk radio. (*See the Media Action Center’s study of the role played by Wisconsin media.)

Let's not let Oregon and Washington go the same way. We've already lost KPOJ in Portland and KPTK in Seattle is supposed to be gone early in 2013. We need progressive talk in those states to assure that voices of working people can be heard. See the petition to Save KPOJ and demand a Congressional hearing: http://www.savekpoj.com/

The Save KLSD film looks at the grassroots efforts to save KLSD-AM 1360 in San Diego as a case study for what happens when policy makers and regulators allow unfettered corporate control of our public airwaves, and do not enforce regulations that, once again, are supposed to ensure local, diverse, competitive radio. KLSD was taken off the air and replaced by a sports talk station just before a major election even though other sports talk stations had poor ratings.  Why? Many believe political motivation, not ratings, was the real reason for the change.

To learn more about media consolidation, film screenings and to purchase a DVD, go to the Save KLSD film website: http://saveklsd.com/

Let’s bring in the New Year with glad tidings and action toward moving our radio stations toward more, not less, diversity of content.  One way to do that is to support KNSJ, the new community radio station in San Diego that is going live in 2013 if supporters can just raise a bit more money.  Among other programming, the station has committed to include an East County Magazine radio show featuring a wide diversity of local voices and viewpoints reflective of our region.  Check it out at http://knsj.org/.