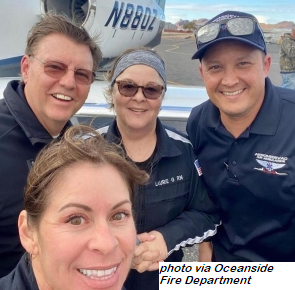 Dec. 30, 2021 (El Cajon) -- Two flight nurses and two pilots have been identified as those lost in the Learjet 35A plane crash that occurred Dec. 27 in the Bostonia neighborhood of El Cajon.

Tina Ward was the wife of the recently retired Oceanside Fire Department’s deputy chief, Joe Ward according to the firefighter’s union Facebook page. A scholarship created in her memory to train future first responders has raised over $44,000.

Douglas Grande’s LinkedIn page states that he was a captain with Aeromedevac Air Ambulance and had been with the medical transport company since May 2019, also working as a first officer.

Julian Bugaj was a certified flight instructor, according to a GoFundMe site set up by his family. Transporting patients and organs around the country for life-saving procedures, the site states, “He is truly a hero in what he did and loved every second of it.” 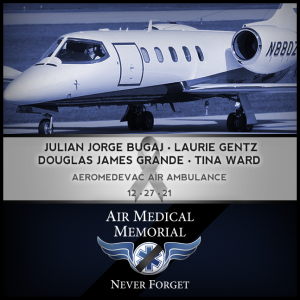 The crash occurred at 7:15 p.m. Monday near the 1200 block of Pepper Drive and North Mollison Avenue. The air ambulance had flown a patient from Arizona to Orange County and was returning home to Gillespie Field in El Cajon when it crashed, according to CBS 8. There were no fatalities on the ground.

The company published comments on their Facebook page. “It is with great sadness that we must share the devasting loss of our colleagues at Aeromedevac Air Ambulance on December 27, 2021. The loss of our friends has left us in an indescribable void,” the post states. “To both us and their families they are unsung heroes, dedicating their lives for others in need throughout our community.”