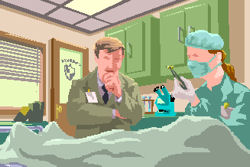 By Miriam Raftery
July 23, 2012 (San Diego)- - The San Diego County Medical Examiner’s office has released its 2011 Statistics and Annual Report. The report shows improvements in some areas where deaths have decreased, while highlighting other areas of concern.
Deaths from drugs or medications rose in 2011, continuing  pattern seen over the last several years. Narcotics, hypnotic and sedative drugs fueled this rise. The report found. Heroin caused the most deaths in victims under age 30, followed by Alprazolam, which was new to the list compared to prior years. Methamphetamine remained the top cause of drug/medication deaths in those 40-69 years of age.  Oxycodon, hydrocodone and alprazolar are more common than in the past.  The County also handled three deaths related to bath salts.
Motor vehicle deaths, which had dropped sharply over the past two decades, rose last year—and alcohol was a major factor. In last year’s fatality motor vehicle accidents, 45% of drivers killed had blood alcohol levels over the legal limit.
Among children, drowning caused the most deaths, claiming seven lives.
A bright spot was a sharp drop in Sudden Infant Death Syndrome (SIDS), with only eight fatalities last year. In 2010, the number of SIDS deaths was more than double that rate (19) and in 2007, the county had 30 SIDS fatalities. The decline is likely due to educating parents about safe sleeping positions for children.
Firearms deaths totaled 197 last year, including 82 involving semi-automatic weapons. The deaths include homicides, suicides, and accidents.
About half of the 20,000 deaths countywide were reported to the Medical Examiner’s office. Of those 10, 225 cases seen by the Medical Examiner, the office investigated 2,853, performing autopsies on 2,853 and external examinations on 901.